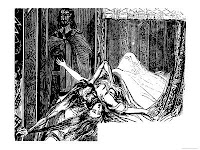 For years, fans of vampire fiction have heard the name. Sir Francis Varney. AKA "Varney The Vampyre." The central villain of a 'penny-dreadful' novel of the 1840s, all 220+ chapters (you read that right--chapters!). Long before Count Dracula, before Barnabas Collins or Louis the interviewee, Sir Francis Varney was the original reluctant vampire. Methinks a lot the reason for that is easy to understand. Like Dark Shadows over a century later, The Feast of Blood (as it was also known) come out as a serial. With a need to stretch out stories for as long as possible, the format pretty much forced authors to explore facets of their characters which otherwise might have been ignored. To engage their readers week after week, on some level the writers had to make their subjects compelling. A pure villain is boring. A mysterious one is interesting. A villain whom you find yourself rooting for in some sense is the kind of stuff publishers dream on.

Well, I recently got around to actually reading this huge tome. Much has been written at one time or another about how Bram Stoker must have read Sheridan LeFanu's "Carmilla" prior to composing his classic "Dracula." For the record, I pretty much agree--although there is absolutely no solid evidence Stoker ever read that novella. I am also inclined to think that LeFanu must have read Varney The Vampyre at some point. Among the tropes present are: 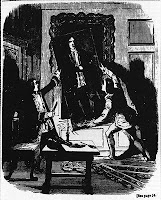 A portrait of the vampire from life.

A hypnotic power the vampire has over one's victims.

A reluctance on the part of the vampire to do more ill than absolutely necessary.

A strong hint that the vampire is in fact related to the target of his predations, i.e. an ancestor cursed with eternal life.

A genuine regret, akin to self-disgust, the vampire shows for his condition.

One is not only reminded of Carmilla, but also Barnabas Collins! Likewise there are some precursors to elements of Dracula here as well -- Varney's cat-and-mouse game with those who know what he is, his interest in real estate, his use of more-than-one hiding place, etc. This is also the first known (well, to me anyway) use of fangs in a vampire tale -- complete with those now tell-tale double punctures.

But all that is historical perspective. How does it measure up as a story?

It certainly begins with a bang. Arguably the most famous passage in the book is at the very start, with a young lady accosted in her bed chamber by a befanged creature of the night. Honestly, it never really gets better and rarely is as good from there onwards.

The young lady in question is Flora Bannerworth, one of three children and their mother living at Bannerworth Hall. Precious few clues exist as to the Hall's location, other than somewhere in the country not far from a cathedral. There is no reference to a port or river. Even more perplexing is the time period, which varies between the early XVIIIth century and the Napoleonic Wars. Flora is the kind of waif one expects in such a tale. Much is made of her extreme beauty, her shattered nerves after the assault on her person, and of her utter devotion to her fiance Charles. She has two brothers. Henry Bannerworth is a wishy-washy sort, while George doesn't seem to have a personality at all. In fact, George eventually vanishes altogether and no one ever mentions him again. There is also Mr. Marchdale, a middle-aged man who is a family friend, and of course Mrs. Bannerworth, who seems to have as much personality as some potted plants. She faints at one point. Well, nearly everyone does at some point in all this.

In essence, Flora's screams wake the family. They chase the ravisher of young Flora out of the house and he is shot. But no body is found, and there's a strong hint he (Varney) was resurrected by the beams of a full moon. Everyone insists that the assailant looks exactly like the portrait in Flora's room, one Marmaduke Bannerworth (an unfortunate name) from a century past said to have committed suicide. Unlike one might expect, folks immediately suspect a vampyre is responsible and check out the nearby Bannerworth tombs to learn if Marmaduke (really--Marmaduke? What were they thinking?) is still there. Sure enough, not only is his lead-lined coffin intact, it is also empty. 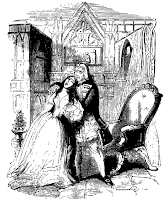 Now the Bannerworths are in financial trouble because the late Mr. Bannerworth tried to rebuilt the family fortunes at the gaming tables, resulting in near-total ruin. Given that Henry and Flora now look upon their ancestral home with horror, and are having trouble keeping any servants (because by now the unnamed village is rife with tales of the blood-sucking dead), they luck out that a local gentleman sends a letter offering to buy Bannerworth Hall outright and for a good price. This gentleman turns out to be none other than Sir Francis Varney, a dead (or undead) ringer for the aforementioned portrait.

Varney, it seems, is most desperate to gain Bannerworth Hall for himself. Precisely why is not made clear -- just as his actual history and identity are a confusing mess. Is he indeed a Bannerworth? Or a medieval knight? Or a Royalist from the reign of Charles I? But along the way, Charles (whose beloved Flora wants him to leave lest she become a vampire and start feasting upon him) challenges Varney to a duel, then vanishes amid a flurry of forged letters. In truth, he is kept imprisoned in the dungeons of the former (now ruined) Bannerworth Hall nearby. His stranger Uncle shows up and tries to help the family deal with the unearthly menage, while a Dr. Chillingham insists he won't believe in the supernatural even if he sees it with his own eyes -- and he in turn conjures up another origin for Varney as a hanged highwayman ressucitated via a medical experiment. One person in the household proves to be in league with Varney, while no less than three riots by locals result in the 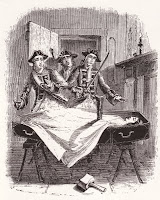 destruction first of Varney's home then of Bannerworth Hall itself.

At this point the story is perhaps twenty percent done! There are yet explosions, sea journeys, attempted suicides, the transformation of a young woman into a vampire, a weird account by Varney of his own origins, following his own suicide via volcano to come!

Still, there is a kind of charm and power to the book, sprawling and overblown as it is. It is surprisingly edgy, as some of the illustrations show. And there's something appealing about the whole set-up.

Honestly, what came to my mind was that this should be re-written, adapted by someone into a more readable (for modern viewers) form, maybe taking the metaphors a bit more graphically and inserting genuine S-E-X into the narrative. Maybe akin to The Darker Passions: Dracula but with less spanking.
Posted by Zahir Blue at 3:49 PM

I adore Varney as stands... is it good literature? No, absolutely not, but it is great fun. There are swaves of it that get lost within the Penny Dreadful's soap opera-ish form but the last third of the mamoth tome is monumental.

My own thoughts on it are here.