Another group of movies I am very much looking forward to...

Let Me In is an English-language adaptation of a bestselling novel, which has been adapted once before as Let The Right One In. Shooting has just begun on this, starring Kodi Smit-McPhee as Owen, the unhappy child of a broken home who fits in nowhere; Chloe Moretz as Abbey, the child vampire who becomes his friend and love; and Richard Jenkins as Abbey's helper/companion. Given how much I loved the novel and the first film, one might expect I'd be outraged about a remake. But, as the author and director both point it, this isn't a remake but a second adaptation. How many adaptations of Jane Eyre, of Dracula, of Sense and Sensibility have there been? Nor do I buy the notion that Americans-Can't-Make-Good-Movies. All that remains theoretical, though besides a few other facts. Matt Reeves, who did the motion picture Cloverfield, is directing after writing the screenplay. For a time, audition tapes of the actresses looking to play Abbey were up on YouTube (gone now, alas) and Moretz' performance was eerie as well as touching. My hopes for this one remain high.

Methinks every Tim Burton fan is looking forward to Alice in Wonderland. Johnny Depp as the Mad Hatter, Alan Rickman as the Caterpiller, Anne Hathaway as the White Queen, etc. What is not to love about the whole idea of this? From what I've read, this whole film takes up the notion of Alice, on the verge of her wedding, revisiting the strange place she once explored in her youth. An intriguing and potentially riveting idea. There's also the detail from a few pictures here and there that Alice's clothes don't shrink with her, which is a touch of realism amid the weirdness that appeals to me. I'm just being a total fanboy here, but this has me excited (and of course I've high hopes that after Alice is finally done, Burton and Depp can start proper work on a Dark Shadows remake). 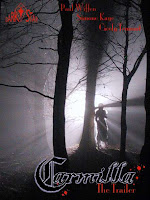 I've far lower hopes for the 2010 film of Carmilla. Its precise status remains a little unclear, but from the trailer one at least gets a sense of what kind of film it might turn out to be (if in fact it is ever finished). "Guilty pleasure" is about as good as one could ask for from this, but that need not be a bad thing. The Vampire Lovers (Hammer's stab at a more-or-less faith adaptation) is a deliciously trashy flick, and one I own with pride. This one doesn't look as good, but shows signs of being perhaps lots of fun. One can hope. Besides, I applaud any halfway decent attempt to film LeFanu's novella.

Notice how all of the above are based on novels? So is my last entry, but this is one I actually haven't read. The Lovely Bones contains one of the most intriguing premises perhaps ever. A fourteen-year-old girl is raped and murdered. Book and film tell the story of her spirit, caught between here and heaven, watching her family and murderer from "the other side." Peter Jackson (he of Lord of the Rings fame) directed and frankly from the trailer it looks absolutely amazing. Let us hope it lives up to that.
Posted by Zahir Blue at 7:03 AM

Email ThisBlogThis!Share to TwitterShare to FacebookShare to Pinterest
Labels: alice in wonderland, Carmilla, films, let me in, let the right one in, the lovely bones

I didn't know Carmilla was in the works -- I hope they keep the gothic setting.

Jackson did a great job with the real-life murder in Beautiful Creatures (did you know that was one of the girls went on to become a famous mystery writer? Way). I'm sure he'll do another great job with Bones.

And of course Americans Can Make Good Movies -- look at the great acting and storylines in the Star Wars Saga! ;-) (sorry Zahir, I just had to....;)

Vampire lovers is my favorite Carmilla adaptation - I love those Hammer´s period Gothic trappings and atmosphere. I too hope they keep the Gothic setting. Fingers crossed...