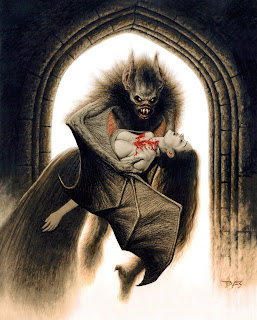 Tentatively titled Winterisle, I'm assembling notes for a vampire novel set in 1836.  It has to be 1836 because that year Walpurgis fell on a full moon.  Will be awhile.  For one thing I have another novel to complete first!  But meanwhile some research is afoot!

You see, readers of the novel will find bread crumbs of other literary works scattered through the chapters.  Two ships visit the island of the title, for example.  One is the Grace of God, which plays a crucial part in the Wilkie Collins novel Amadale.  Second will be HMS Wessex, named for the semi-fictional county where Thomas Hardy set so many of his stories.  Likewise one character will mention a desire to go to Milton, Elizabeth Gaskell's version of Manchester in her work North and South.  Two of the main characters are children of Henry Tilney and Catherine Morland from Northanger Abbey by Jane Austen.  Others include relatives of persons mentioned in short stories by H.P.Lovecraft and Edgar Allan Poe, a reference to a school from Jane Eyre, the son of a two minor characters from another Austen novel, a name mentioned by Arthur Conan Doyle in one of Sherlock Holmes' unchronicled adventures...and so on.

Not quite sure what to call this kind of story, although some antecedents come to mind.  One of these is Alan Moore's League of Extraordinary Gentlemen.  Another is Kim Newman's Anno Dracula.  Yet another is Evil at Pemberly House by Philip Jose Farmer and Win Scott Eckert (Doc Savage's daughter inherits the estate where Mr. Darcy and Elizabeth Bennet lived--with relatives of Tarzan present).

Mind you, I'm also delving into some material that is not in the public domain, hence given the form of hints and/or tributes.  One such is the title.  Another is one of the three major characters, whose name and appearance give evidence of a link to an extremely popular series of contemporary novels that have been (and are now being) made into hugely successful films.  Plus a nod to some favorite television programs.

Fair amount of research yet to do, which so far has proven both fun as well as helpful.  Details lead to other details.  Specifics offer new ideas.  Just like cooking--one ingredient suggests another, all of which need to simmer in my imagination.

(And yes, I've included references to Dickens.)
Posted by Zahir Blue at 8:50 AM