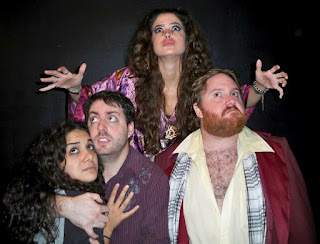 I'll confess to feeling sad.  Twice I described the play I saw last night in very specific terms.  And twice I had to explain half of it.  Makes one feel old.

The play is The Para Abnormals by Thomas J. Misuraca.  It premiered last Saturday night to a standing room only crowd.  That is actually a little less impressive than it sounds, because Zombie Joe's Underground Theatre isn't really that large.  But on the other hand, it is also surrounded by NoHo competition and lacks any parking.  So when I say "less impressive" better to think "slightly less impressive."  Especially since the audience enjoyed the show quite a bit, as evidenced by the most sincere form of feedback any comedy can desire--laughter. 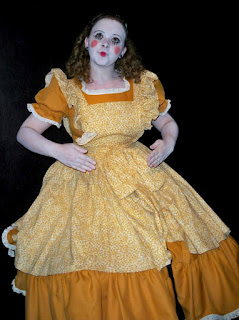 Bottom line, The Para Abnormals tells the story of a nascent ghost-hunting business composed of three friends:  Driven Jill (Jessica Amal Rice), her far more mellow boyfriend Stan (Tyler McAuliffe) and the lovable but somewhat simple Chuck (Tucker Matthews).  When investigating a haunted house--their first case--the group sets off a chain of events that nicely combines mystery, spookiness and comedy with more than a few drops of romance tossed into the stew.  Seems ghosts like Chuck.  In fact, to them he's something like a huge neon sign.  So as long as he's around thing tend to happen.

Following the team's wake is a more professional psychic known, weirdly, as Chai Tea (Lauren Parkinson) who has motives of her own. 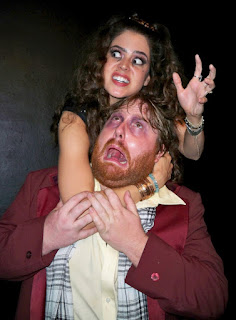 As far as the script goes, I'm going to recommend Mr. Misuraca consider expanding it to full length and/or submitting a version in screenplay format.  Methinks it deserves that kind of treatment.  In truth, I would describe the story as a kind of XXIst version of Blithe Spirit blended in Ghostbusters.  Sadly, it seems no one remembers what the former is so here's a precis--a drawing room comedy by Noel Coward about the accidental summoning of a man's first wife from beyond the grave, who then won't or cannot leave.  Many a theatre company all over the world stages it each year.  Quite rightly too.  It remains a lighthearted bit of entertainment written with great wit and consummate skill.

This play displays more one-liners than wit per se.  But they got laughs, as did the memorable little characters that dot the show.  Gradually--and this is no small feat--we become engrossed in events and wonder what in fact is going on.  Then, when we learn, all Hell breaks lose.  Very nearly literally! 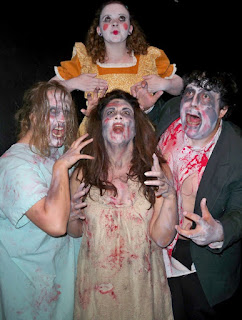 Honestly, the cast doesn't quite jell.  The play demands a blend of realism and stylization they didn't quite find, but that in no way distracts from the sheer fun of it all.  Ms. Parkinson as Chai Tea seems over the top ever single moment but that seems to work just fine.  It fits with her character, and (as my evening's companion pointed out) she makes a refreshing change from the stereotype of a middle-aged overweight medium.  Rather, she is clearly attractive and knows it, even uses it.  More, one comes to expect almost anything from her.

Ms. Rice and Mr. McAuliffe have much harder roles.  Their roles need to navigate between almost-camp and nearly-serious.  Each goes a little too far in each direction.  A little.  Mr. Matthews very nearly steals the scenes he's in, coming closer to the blend the play probably needs.  His Chuck reminds me a little of some of Shakespeare's funny/pathetic characters like Sir Andrew Aguecheek--ridiculous and yet suddenly very human for all that.

The special effects work, no small feat on what is clearly a modest budget and lie on stage.  Part of the humor and sense of mise-en-scene is the whole spookiness of it all.  Like I said, this could make a find full length play and it might make a better movie!