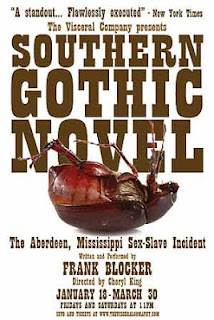 Years ago, I lived in New York City and had the vast good fortune of seeing A Bronx Tale performed as a one-man show by Chazz Palmienteri. One-person-shows used to be more popular, but they still can amaze when both subject and performer come together in some moments of real magic. Right now such a show is on offer from the Visceral Company in Hollywood. There, at 1312 Wilton Place, you can see Southern Gothic Novel until March 30, 2013. I highly recommend you do so.

In effect, we see an entire novel (with the subtitle "The Aberdeen, Mississippi Sex-Slave Incident" which just sounds so marvelously trashy doesn't it?) enacted out by one man--the author, Frank Blocker. During the 70-minute show, he portrays a total of 17 characters. All but one (the narrator) make up some of the population of Aberdeen, Mississippi. No small feat, that.

The story itself center around Viola Haygood, an almost terminally romantic librarian in her early twenties--a younger, more naive, somehow less toxic version of several Tennessee Williams characters. Her fantasies and pretensions set the story rolling. She has--not for the first time--fallen in love at first sight. The fact that several girls about her age have gone missing lately simply doesn't factor in as Viola pursues the mysterious dark man entering Big Otis Saloon each night. Big Otis turns out is a woman, Odessa King--quite big, quite black and very matter-of-fact. Yes, Viola does indeed meet the object of her virginal desire. Along the way, we meet her mother, a not-very-bright neighbor named Jimmy who adores Viola, an elderly judge, a chain-smoking pair of gossips, some professional (as opposed to "competent") criminals, and Mrs. Wong, owner of the town's only Chinese Restaurant.

And a june bug.

Let me say right here that Mr. Blocker accomplishes a tour-de-force as all these characters. Almost all of them have southern accents for example--Mississippi accents no less. Yet we can instantly tell who is who. Partially because their voices are different, but also the accents vary in the way that real ones do. He also does wonders in maintaining radically (sometimes subtly) different body languages. At one point, a character makes himself known just with a gesture--but we know who is it! He even keeps in up successfully towards the end when a startling number of these characters are on stage at the same time! At one point three of them even get involved in a physical fight!

The technical feat alone is worth watching!

But don't suppose Mr. Blocker's technique is all we have to enjoy in the show. Southern Gothic Novel comes across as a gentle, affectionate story making fun of a people and a place that one likes, even while shaking one's head at the human foolishness. A lot of that stems from the fact we can recognize ourselves throughout. Who hasn't suffered the pangs of unrequited love? Or done something really stupid? Watched someone close to us make a fool of themselves in public? Leaped instantly and as far as possible to the wrong conclusion? The true test that the story works just as a story is how the ending feels. Without going into detail, we shake our heads once more but smile while doing it. And then keep smiling as the lights go up.

The show is at 11pm on Fridays and Saturdays through the end of March. Tickets are $12 which can be purchased at the theatre's website or at the door (1312 North Wilton Place, Hollywood);

It was a fun show, use to watch it always.