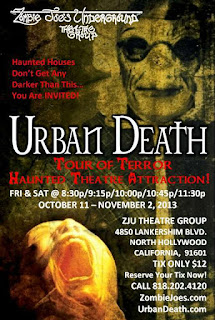 Fans of Zombie Joe's Underground Theatre Group probably already know about their recurring show dubbed Urban Death. I certainly had but this marks my first exposure to their "signature piece" as the 2013 version premiered.

Grand Guignol meets Performance Art. Such forms my description in a nutshell. Non-linear for the most part, with very few spoken words. Something like two dozen vignettes from minutes to seconds in length. The vast majority have music or at least sound effects. Much of the cast I've seen before. Vanessa Cate and Roger K. Weiss, Denise Devin plus Corey Zicari and Willy Romano-Pugh as well as many others (about two or three I haven't seen before--including Cimcie Nichols and Adalys Alvarez ). On top (sometimes literally) of all these are Mark Hein (who is braver than myself), Emmanuel Paraskiv, Chelsea Rose and Kevin Van Cott. Many appeared in such shows as Love Me Deadly, A Down and Dirty Christmas, Not With Monsters and Notes From Underground.

As for the subject matter--well, it is DEATH. Not a rumination on what mortality might mean or how we as mortal deal with our knowledge that our time will end, sooner or later. Rather, this becomes all about the experience of death. Sometimes quite graphically. I wondered just how much and how rapid the washing backstage must be! (For the record, when the cast emerged to meet the audience afterwards all their hands were stained blood red.)

Death of the body, of course. As well as what might happen to the body after death.
Death of the soul--from fear, from a love of pain, from use as nothing more than meat (metaphorically, and not).
Death of hope.
Death of identity, via its eclipse--by music, gender, even motherhood.

What you carry away from this hour-long event remains up to you. This is not Arthur Miller or George Bernard Shaw, telling you want to think. Nor is it a history, albeit fictional, from which you derive what lessons you can (thus we're not in the land of Tennessee Williams or William Shakespeare). Rather we experience something, and take from it only what the visceral sense of events can. A bit of Ionesco, a few touches of Edward Albee, some dashes of Lady Gaga--but also first and foremost Zombie Joe.