H.P. Lovecraft casts a long shadow in the literature of the fantastic. Perhaps because his style, like that of many writers Lovecraft admired (Dunsany, Machen, Poe, etc.), tends towards the very literary than the dramatic, few adaptations get all that much renown. Dracula and Frankenstein remain straightforward stories after all. Even The Turn of the Screw has at least an obvious plot. Not so much The Call of Cthulhu.

This show doesn't try and tell one story, but rather present several, in a manner perhaps best described as dreamlike. In the process we experience many tales that don't lend themselves to long versions or plot-driven films. And we also see many theatrical tricks that help us enter into the world of the show, up to and including puppets and shadow theatre.

Eric Sand begins, quoting Lovecraft on the subject of  (appropriately) of fear. Afterwards we enter into The Testament of Randolph Carter (Carter many agree is a kind of surrogate for Lovecraft himself, a recurring character in several tales). Mr. Carter has to tell someone--presumably the police--again and again of what happened the night his friend vanished.

Next The Cats of Ulthar, narrated by the lovely Devereau Chumrau explaining precisely why it is in the far-off city of Ulthar they have made it a crime to kill any cat. As it happens that story uses quite a  bit of said stage tricks. Music accompanies Chumrau's narration, while puppets of the various characters make their way on stage. Later, shadows do their part.

Followed by The Outsider, generally regarded (quite rightly) as a seminal Lovecraft piece. Maya Eshet relates that story, and here the evening's show went from "good" to transformative. The previous two parts were done very well, but someone this one got under my skin. Part of that must lie in the power of the piece itself! But also, to see a woman has the central character/narrator shifted Lovecraft's piece into a different, unexpected place. That I 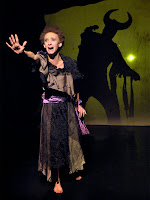 already knew the climax, yet still shuddered at is revelation, gives some idea of the power at work in this production.

The Picture in the House was the only Lovecraft work here I didn't recognize, and functions more as a straightforward thriller than the others. Steve Peterson in particular did a fantastic job capturing a character both bizarre yet strangely real (also, the Maine accent is very tricky to get right, and he nailed it). Despite my warning above, the actual crux of the horror in this story shall remain untold my yours truly.

Next Cool Air as told/performed by Nicole Fabbri, another shifting of gender that works quite well. This one in fact was once done as an episode of The Night Gallery years and years and years ago. But in the hands of the Visceral Company the result captures far more the weird and brooding atmosphere of Lovecraft. This has Fabbri interacting with shadows, as well as other cast members.

Finishing up are Nyartlathotep and an epilogue The Thing in the Moonlight with Price again, but joined now by other members of the company. Perhaps you've noticed how I've avoided describing most of what occurs on stage? Not because it would spoil things (although it would, to some degree) but because my mere descriptions don't truly convey how the show flows and (most importantly) feels. The Lex, where Visceral performs its works, remains a small theater and the show uses that to great effect. A claustrophobia of the emotions begins to grow, even though other productions here do not feel at all cramped or unpleasant. Here, though, one feels transported to another place and another time. Back before and around the Edwardian Era, when a feeling the world made logical sense felt more intact. Yet also, when less was known. Forests still frightened, and

shadows might seem to move. Machines feel more mysterious and the echo of the past seems louder. Somehow we feel these people have not traveled as much as we ourselves. And by some strange psychological alchemy, they are more prone to notice the horrible Other while less able to accept such notice without trauma.

The result is eighty minutes of shadows we increasingly realize are anything but empty. Not only the actors I've mentioned but Andrew Bourgeois, Daniel Jimenez and Mark Souza all help create the overall feeling of fascinating dread. Which is not to say some moments don't falter. One vocal recording doesn't really work, at least not for me. The recording of Fungi from Yuggoth barely accomplished what it seemed to be aiming for. For that matter I'd have to say the play stopped rather than coming to an end. But these remain nitpicks, and take nothing away from all the elements that did do exactly as they should have. Case in point--I saw this show on a Sunday matinee. When emerging into the lobby with its open door, the streaming sunlight outdoors felt unnatural for a few moments, as if I'd just spend almost an hour and a half where sunlight could not belong. Which, in a way, I had.