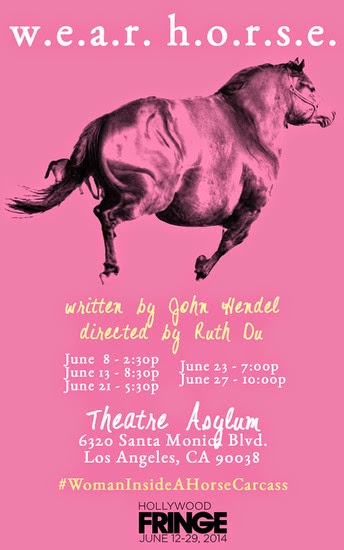 Wearhorse (or Wear Horse) is based on the kind of real life event that nearly always makes people go WTF????? About someone who posted pics online of them posing inside a gutted horse carcass.

Now, while a bit squeamish, I'm not adverse to a play that makes me look away now and then. Discomfort can easily be part of fascination, even entertainment and certainly enlightenment. Parts of this play actually made me squirm in discomfort, bordering on nausea. Not a lot, but bits.

Do I get something in return for this? Well, yes. But...

First let me address the script by John Hendel. Kudos for taking on such a startling, even provocative subject to explore. Ultimately it isn't clear he has much to actually say about the events. Not sure he or the play need that. If this is simply a snapshot of three people so in search of an identity they go over the edge, well and good. No complaints there! I want to also praise the way the characters demonstrate they are aware this is a play, that they are in front of an audience! This was arguably my favorite aspect of the show! But I do wonder what happened to it? Why did it simply stop? More, I thought introducing this aspect didn't quite work. Not sure why.

More problematical was addressing the audience directly in monologues. Not that this is a bad thing, something to be avoided. But experience tells me this tends to be a trap for actors. So much training of actors in our times is aimed at either physicality and/or naturalism that a monologue to the audience without a justifying context tends to become almost default akin to the intro of a song in a musical! It shouldn't be so. But that is the nature of theatre today, at least way more often than not.

Reginald (Brendan A. Bradley), the first actor to speak, begins directly to the audience. What is the context? The script as produced doesn't really give a clue. Is he telling a psychiatrist what happened? Are the audience his surrogate imaginary friends? I'm not advocating any of these solutions, but noting the actor didn't have an answer.

Along those lines, a plastic gun in his hand doesn't help. I get that maybe it is supposed to justify the unreality of events, but the fact I had to think of that afterwards shows in the moment it did not work. Here we get into the responsibility of director Ruth Du in her theatrical directing debut. She seems to have approached this whole work intelligently and very shrewdly cast interesting, appealing actors as these weird, frankly twisted human beings--people so distorted that the posing inside a dead horse ends up being the tip of a not-mentally-healthy iceberg. Anything to trick...er,  help the mundanes into sympathy. Bradley certainly shows more than appeal, but a willingness to be vulnerable.

Caroline Bloom plays Erica, Reginald's partner in extreme art. If anything she has even more charm that Bradley! Rounding out the cast is Angela Leib as Patty, Erica's totally deranged (I'd go so far as to say paranoid schizophrenic) Mom. She gave the best performance of the three, having ended up deepest inside her character.

This kind of story requires a real diving inside and a diving deep to really get at the meat of these characters and what they are all about. Everyone needed to enact metaphorically the central act of the play--scooping out the viscera then taking its place inside. Which is what I did not see. Now, this is hard, especially given the amount of rehearsal shows for the Fringe Festival tend to get. When the director isn't used to live theatre and the actors are not part of an ensemble which has built up a level of real trust, even harder. So it isn't as if it is at all fair to complain that this production didn't meet its ambitions. The fact remains I walked away thinking about the play but not moved. I found it interesting, not compelling. Never once did I enter into these bizarre characters' lives, see things from their view. So my experience ended up the bare minimum one could expect from a talented director and cast with a play that incidentally felt too short for the subject.