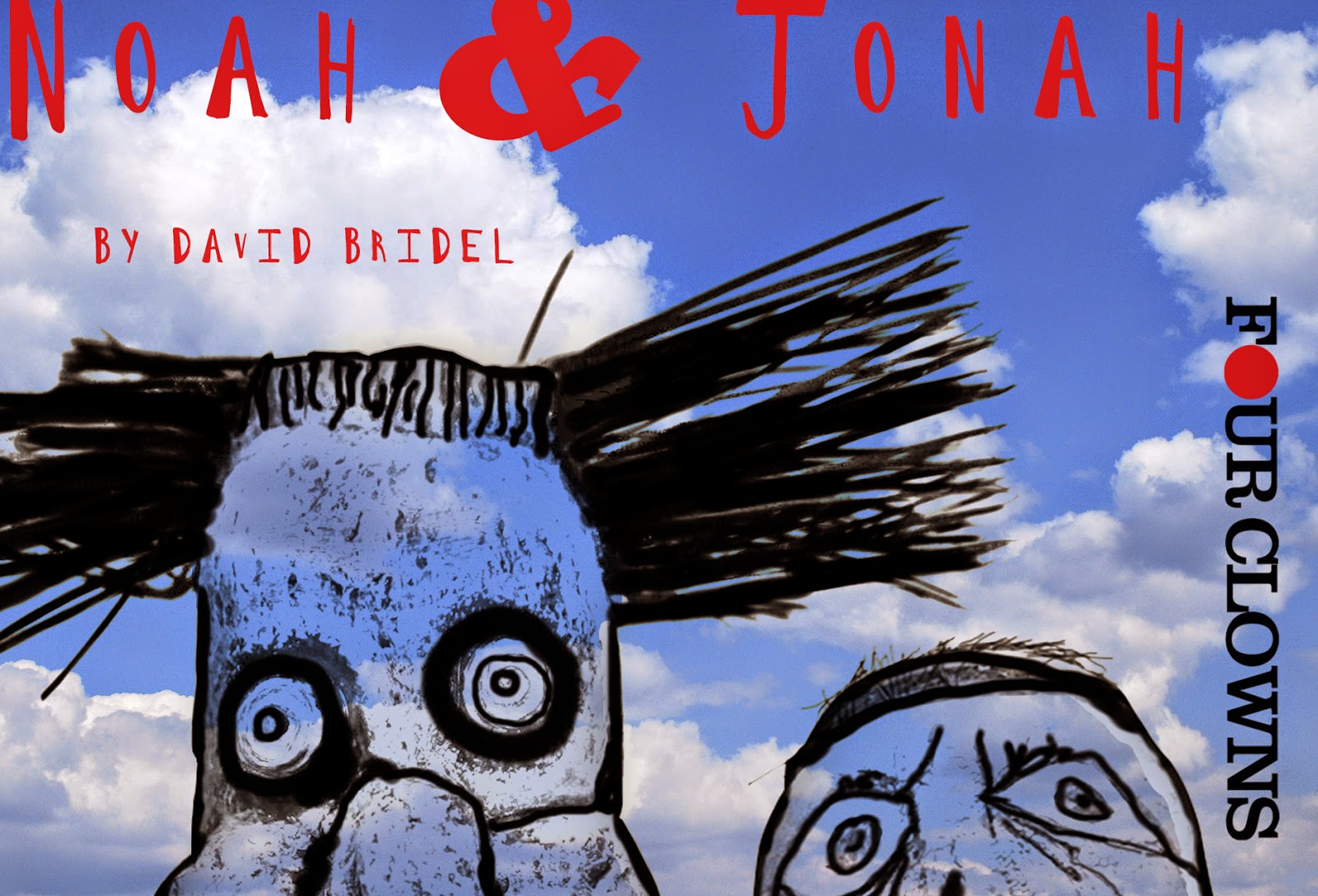 Four Clowns is a theatre company which eschews naturalism in favor of...well...the stuff of clowns. By that I mean a lot more than a bright red nose (although such remains in evidence). Rather they take the flare, the exageration, the bright colors and obvious gags as a springboard into their shows. The result feels up close and personal, funny, surprising and pushes us the audience outside the box of how to see the world.

Potentially, this can be great!

In the two shows Noah and Jonah (both by David Bridel) the result qualifies as 'great' easily. But what do I mean by 'great'? Well, first of all the plays entertain on many levels. Both are based on the biblical tales (and I must admit the second is something of a favorite of yours truly). Yet each ends up told in such a deliciously over-the-top way, the manner you might expect in a children's show with puppets and sound effects and anachronistic silliness. Yet all this glorious tomfoolery remains aimed at adults. Puppets of the Wicked People in both plays gloat at how awful they are, cackling like cartoon villains but describing acts more worthy of Hannibal Lecter than Witchie-Poo (if you don't get that reference go do a search for "H.R.Puff-n-Stuff" at once!). God appears as a character in both plays, both as strange and amusing presences that might well upset those deeply wedded to more traditional depictions of the almighty.

For the record, I didn't mind at all. Although quite devout, I saw these plays as fitting very much into what I personally see as the purpose behind Creation--for the Divine to become something new by enacting out a universe. But I digress...

'Great' also because the shows move, provoke, entertain and remain surprising yet weirdly logical throughout. They re-imagine stories we all know in ways to make us question them, our assumptions and even ourselves without force-feeding answers. Yet they remains charming as well as simply fun.

Noah tells the story we've all heard, of a wicked world that God decides to purge and the one family Chosen to survive. In this one God is a huge face and hand way up in the sky. Amid it all is a blend of the slapstick with the profound, especially when it comes to Noah himself and his wife Delilah (nice touch that God keeps getting her name wrong).

Jonah goes further in the re-telling, turning the story of a deeply reluctant prophet who finally does God's will only to see God forgive the city Jonah warned when they repented. In this one, Jonah is a modern day "dude" in Los Angeles who's writing a screenplay about his life, and keeps trying to take a long nap rather than face any real issues. God in this one is a hippie on a skateboard, but increasingly we realize that is nothing but a mask for something we probably cannot ever really understand. It becomes a psychedelic odyssey for Jonah, complete with a strange friendship he develops with The Whale.

All of which adds up to a thought-provoking piece of total charm, one which reminds us (maybe) that the destination is not unimportant but the journey is what counts--not so much where you go and what you do, but who you are and become.

Both shows play at the Annenberg Community Beach House at 415 Pacific Coast Highway, Santa Monica, CA 90402--a venue with more than a passing resemblance to Shakespear's Globe. Which seems appropriate. It is outdoors, using the stairs and porch and balcony of the Beach House as a stage with us (the audience) likewise in the open air. Dress appropriately. Bring a hat at the very least. Here is the schedule:


Tickets are free to the public; reservations required.  Reservations may be made at fourclowns.org; the elderly may call 310-458-4904 to make reservations.