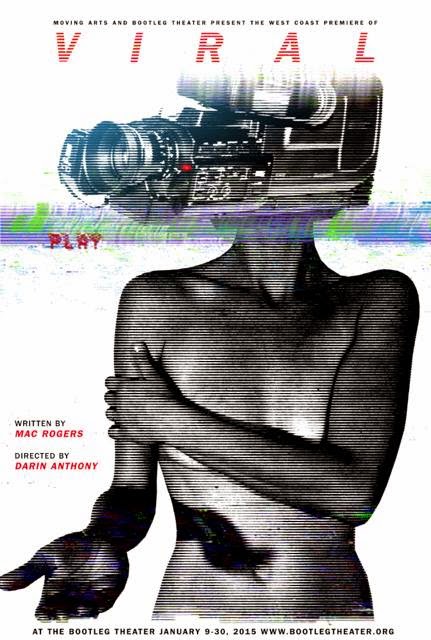 Mac Rogers' Viral marks my first exposure both to this playwright and the Bootleg Theater which produced it. Both created quite an impression. A strong, positive, fascinating and disturbing one. But let us leave adjectives aside and go into details.

Viral tells of four (well, five but the fifth only appears in once scene) people who come together under circumstances I for one had never even considered. Geena (Mariel Higuera) and her brother Jarvis (Oscar Camacho) share a home with her boyfriend, and suddenly get a hit on a website. Not only thrilled to the point of near-panic, they get even more excited upon learning the visitor is a woman. Geena--against instructions--chats with her. The website itself has something to do with suicide. We don't know what. The boyfriend Colin (Daniel Dorr) comes back with an even more powerful reaction. Here we starting seeing a hint of what all this really entails. Geena persuades Colin to relax with some love-making, but one involving some kind of video footage they haven't watched in awhile. Something about rednecks on a porch, waiting for an ambulance.

I could feel a tiny bit of my mind go tilt at this point.

Eventually, the woman online named Meredith (Alicia Adams) arrives, someone it turns out suicidal and looking for help to end it all quickly, easily, painlessly.  The three housemates prove more than willing to do this, but they have an agenda. All three share a fetish, an intense sexual desire to see someone die. Not to kill people! Nor to see anyone hurt! They're not animals, they insist, nor sadistic. One reason to praise their performances lies in the fact I believed them. So too does Meredith. They want to record her death, the moment of release. For their own pleasure and lots of others (a little more income would make a difference too--their home we're told is pretty wretched, and the minimalist set by Aaron Francis suggests this with subtle firmness, not least because of the color scheme).

Such a scenario should make one's skin crawl. It certainly shocked, although not too much because the whole play eases the audience into realization. More, by then we've found ourselves liking these characters, or at least wishing them well. No small feat, because the entire production depends on a tricky balancing act. Dorr's Colin for example could come across as abusive and vicious. Yet he never really does, not even when he's yelling and calling people "stupid' and blaming them for things clearly not in any way their fault. The nuance we see is how this obnoxiousness stems from insecurity and myopia, not mysoginy. Not cruelty. Part of this remains how Geena clearly does not fear Colin, not even a little bit. All this without anyone ever declaring some on-the-nose dialog (or worse, monologue) about their real feelings or some sentimental formulae that makes It All Alright.

Instead, we get what happens as Meredith agrees, then has to stay with them a few days until everything is ready. Like the drug for Meredith's overdose. Plus the recording equipment to capture The Moment. Buying a dress for Meredith. All very interesting and giving lots of opportunities to peel back the onion of these persons, without ever providing a full biography. Mostly we get hints, coupled with the way they live--the moments making up of how they simply react and act. Goofy and strange, plus quite disturbing in all kinds of ways, still Jarvis and Colin and Geena never seem like cardboard cutouts nor a set of quirks.

The whole production dives into the reality and nuance so consistently I'm left very impressed indeed, not least by director Darin Anthony. Not least because this is who chose the cast!

Here's an example of what I mean. The main four characters--Colin, Geena, Jarvis and Meredith--all have really excellent actors portraying them. Anthony clearly gave a lot of thought into their casting, but the relatively small role of Snow (Mark Kinsey Stephenson)--a distributor of this specialized kind of footage--likewise got full attention. More than any other part, this one could have been nothing but a pile of stereotypes, but we saw nothing of the kind. Every single person, including slick-as-all getout salesman, remained a human being throughout. Which tends to happen far more rarely than anyone likes.

At the end--and in seeing the play you'll understand the significance--what our lead characters achieve is to push past the fantasy into the Real. One might describe it as forsaking pornography for love. Beautiful. Sad, too, because life can be like that. But also deep and for us no less than them, something that moves.