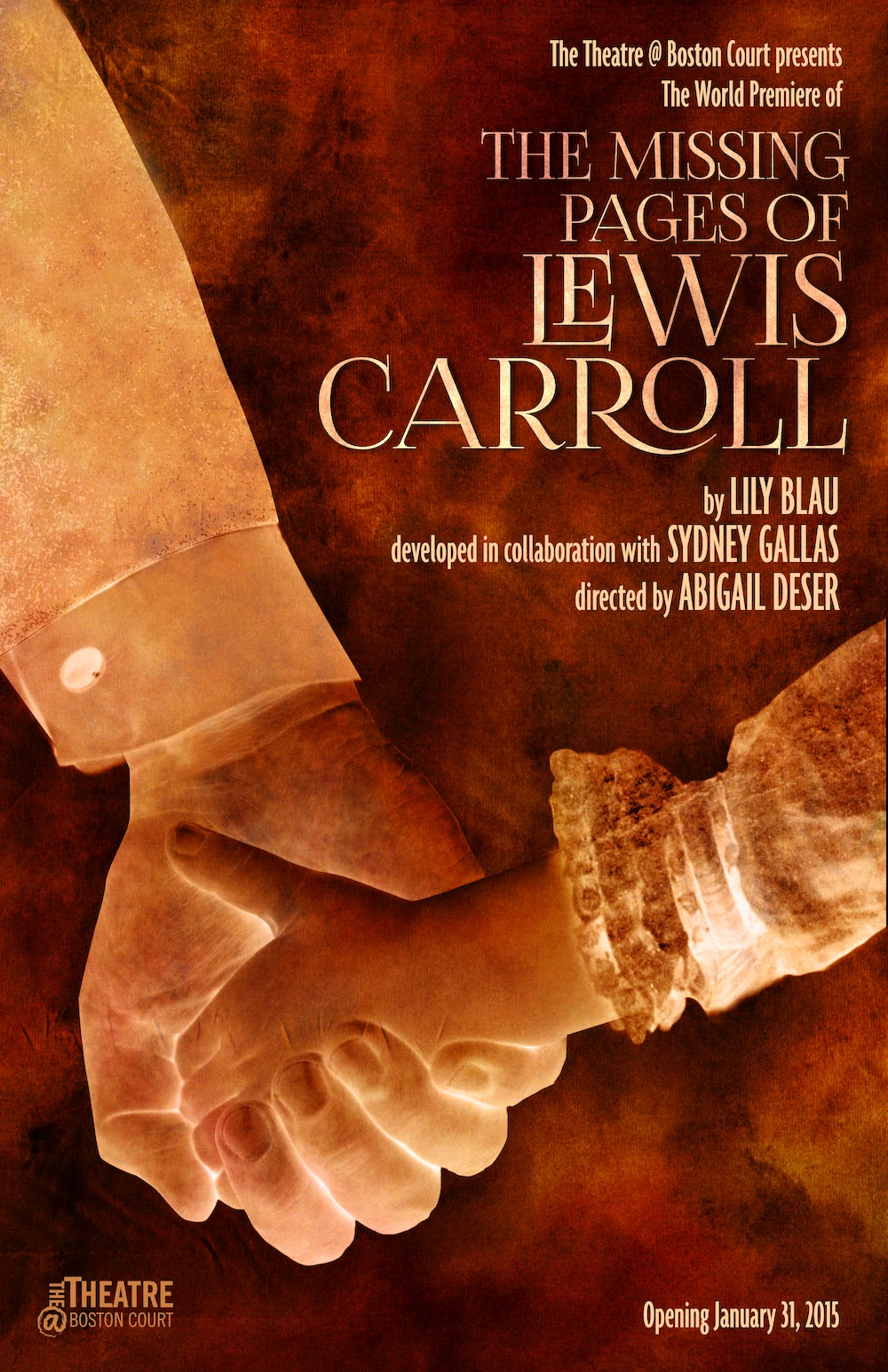 I feel a certain need to disclaim here.  Like Amadeus and Richard III, the play The Missing Pages of Lewis Carroll (in my honest if perhaps not humble opinion) does not relate history, at least not accurate history. I have my own views about the persons and events involved, explored in part in this recent BBC documentary. How much attention does that merit?  An excellent question--whose answer frankly seems elusive.  Playwright Lily Blau is no more primarily an historian than William Shakespeare, after all.  Sadly, we too often suppose good dramatizations (and this is very good) represent historical truth.  But then, this version of events remains at least possible.

The Missing Pages of Lewis Carroll at the Boston Court Theatre in Pasadena takes its title from Charles Dodgson's diaries, which have had a few pages cut out. We don't know who did the cutting, although most assume his family members did so after the man's death. Dodgson (1832-1898) of course was an Oxford professor of mathematics who, under a pen name, created some of the most beloved children's stories as well as some fascinating, bewildering poetry.  Scholars pondered and continue to study his relationship with the children of his Dean, Henry Liddell, whose daughter Alice (1852-1934) certainly proved the inspiration for his famous stories Alice's Adventures in Wonderland as well as Through the Looking Glass. Alice remains the focus of most such research, as well as this play--although for dramatic purposes all kinds of things ending up streamlined, real life as ever proving far too complex for anything like a linear story.

We meet Dodgson (Leo Marks) in his rooms at Christ Church, Oxford in the year 1880, as he prepares for a visitor. The spark that begins the "action" as it were is when he puts a rabbit doll away, in a trunk. Moments later, the White Rabbit (Jeff Marlow) from his story appears, to Dodgson's annoyance more than distress. We'll come to see the Rabbit as a the avatar of Dodgson's memories, hopes, fears and dreams.  Dodgson begins to relive/remember events twenty years before, when as a man pushing thirty he first met the Liddell children--Lorina (Erin Barnes), Edith (Ashley Ruth Jones) and most importantly Alice (Corryn Cummins). He proves a man in many ways more comfortable with children than adults, although in fact a charming conversationalist quite at ease discussing university business with Dean Liddell (Time Winters) or religion with the somewhat formidable Mrs. Liddell (Erica Hanrahan-Ball).

But the heart of events, which as the play progresses takes flights of fancy where dreams and desires take stage--at times to Dodgson's indignant horror--becomes this man's increasing friendship with Alice.  At one point he tells the three little girls about love, about  how it can drive one quite mad. In some ways one comes to believe Dodson sees love in precisely that way, or at least experiences it so.  He falls in love with this--to his eyes--utterly beautiful child, who in turn loves him, maybe even falls in love with him.  The subject matter ends up handled with considerable delicacy, so much so (and this remains vital) we never feel we're watching the story of a child molester.  Much praise goes to Marks as Dodgson, who retains a blend of great compassion and kindness with emotional tricks to let him avoid/define his desires. His performance lets us see this man with compassion, as someone whose love story cannot help but be tragic--not least because it ending up taking what was almost certainly the least tragic of all possible courses.  Marks--and especially also Cummins--do the story proud in their portrayal of a situation without happy options.  Technically I was also very impressed at how little things such as Dodgson's stammer portrayed so much of his inner life, just as Alice's uncomfortable transition

from girl to woman we see clearly if subtly throughout.  Cummins in particular plays several characters really (as do Barnes and Hanrahan-Ball), because her Alice is not only seen first as a child then as a young woman, we also see the dream version of Alice in Dodgson's mind--the little girl who wants to marry him, would reach out and seek his physical advances.

All the while this accompanies dream images and lines from the Alice books, perhaps most obviously when Mrs. Liddell appears more than once as the ferocious Red Queen, she of the imperious looks with a voice demanding "Off with his head!" That this woman didn't come across in the end as some kind of bitch, a cruel or heartless person, makes one more of many nuances making this such a satisfying night of theatre! So consistently superior was the entire production indicates just how skilled director Abigail Deser must be.