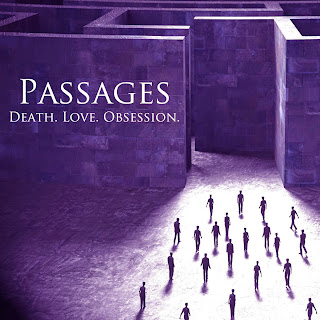 Theatre Unleashed is a company committed to periodically putting on a collection of ten minute plays, as well as really extremely high quality full productions.

Passages marks their latest such, and it pretty much captures what I like and dislike most about the whole tendency these days to mount such mini-plays. The problem lies in the fact so few ideas can really be sustained and explored adequately in a mere ten minutes. Those that do, most usually end up as little more than funny skits, but rarely receive the kind of rigorous rehearsal effort required to pour so much into so little.

Here are the five that make up Passages: 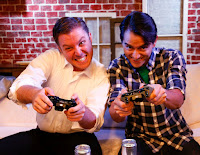 Love for Beginners by Cesar Abella and directed by Kire Horton is a nice idea--a personal romantic/sexual odyssey of a nice young man unlucky in love--performed by some good actors (Jahel Corban Caldera, Michael Lutheran, Roger Weiss, Stepy Kamei, Lacy Green). All the
elements were there, including some very humanity (as opposed to plot or prop or coincidence)-based humor and genuine charm. But it came across as too short. Mind you Abella also wrote a play TU will be doing for this year's Hollywood Fringe so it looks like we'll get to see what they're really capable next month! 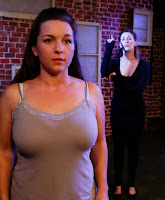 Pretty Face by Jenn Scuderi Crafts, directed by Sammi Lappin, is frankly quite a bit more existential but could easily fit into the ten minutes allotted. But it seemed under-rehearsed. Very much so. With only ten minutes to fill, and two characters, every single note needs to achieve something close to perfection. Woman (Kalyna Leigh) and her Reflection (Heather Smith) weren't in perfect physical sync from the start, which made the whole (clever, potentially very moving) piece feel off from the start. And so it proceeded. Lovely idea, with seemingly good performers but they didn't achieve what seemed on the page.

Home by Jim Martyka and directed by Jase Lindgren was another that just needed more time. Bill (Paul Thomas Arnold) playing the father slipping into dementia did a fine job, but had a huge advantage--his character literally lives only in the one eternal moment of now. Michelle (Katie May Leo Porter) had to carry and convey the entire history of this relationship, and do it in ten minutes. The playlet doesn't give her enough to do it, not because the writing is poor (far from it!) but there simply isn't the space. It is as if someone reduced a full sonnet into a haiku.

Restless by Bobby McGlynn and directed by Carey Matthews faces this problem even more so, but offers a more tantalizingly wild glimpse of what should be a much longer and more complex play.  Theresa Stroll, Graydon Schlichter and Mike Gerbi give us this wild ride of a blind date from (and into) Hell with a dizzying flurry of imagination--but it wasn't enough. Nowhere near.

Good Morning Princess by Brandi June and directed by Cameron Stark gives us something of a delicious take on a fairy tale with Margaret Glaccum as a princess who has slept for a hundred years and David Foy Bauer the prince who's come to wake her. This was fun and fit into the format of the ten minutes very nicely indeed--but does feel like a (very good) sketch rather than a play. Like most of the works in this group it makes fir a nice little show, with some clearly talented people performing for you.

Note: I saw but failed to complete my review in time for the previous Ten-Minute Play Showcase by TU, Friends with Penalties, which showed a wider range IMHO. But I apologize for that.