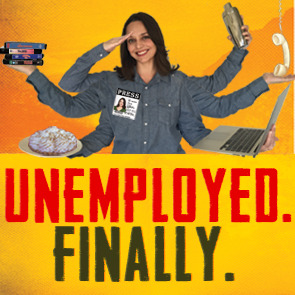 Heather R. Dowling's Unemployed Finally... got me thinking about one-person shows. Because it is one. Which you've probably figured out already. The subject matter is admirably captured in the title and poster as well as the promotion:

The story of a woman who tried on 30 jobs, in 30 years before finally doing what everyone said she couldn’t. Heather Dowling is an actress and writer who has impersonated someone who wanted a “real job” since she was 14. She has surrendered to her passion for writing and performing. But now she has dirt to dish about the odd-jobs and odd-balls she’s encountered along the way. Come see her now. Unemployed. Finally.


So how is it? Fun! Let me be more precise. One person shows pretty much need a few  specifics to work. First is an interesting subject matter, or at least an entertaining one. Dowling's story of (essentially) how she ended up making this one person show proves exactly that. It all comes down to the perennial conflict between what we want versus stark reality. Classic, really. The same as many a more famous piece of theater from Hamlet to The Fantastiks. But that proves no guarantee! More importantly, how does Dowling pull off the actual performance? 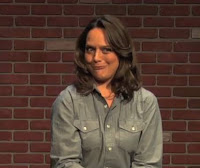 Happily she not only has genuine stage presence (an ineffable something every smart director loves to see) but a fine sense of timing as well as physical clarity. Both vital when you're the only one on stage. Literally every eye remains fixed on one person, who needs must remain focused and clear. Many will say this comes out most in terms of playing different characters. Well, yes and no. She does accomplish exactly that, with style even and enough vivid detail they all come off as individuals. As a nice touch (that frankly some actors should learn from her) lies in the fact that each character has a different attitude and a different physicality. They look at things with different eyes, sit in chairs with different bodies, listen even with different faces. Yeah, they are all Heather R. Dowling's but she makes them different. And in that lies precisely why we end up caring, why we smile when she (as she clearly does here on stage before us) achieves her dream of theater. Makes for a charming and engaging hour of theater, one that also strikes a chord in those (like myself) who in some way or other share her dream.