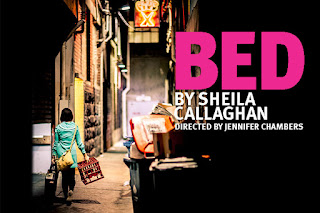 Okay, this is the kind of show I tend not to like.  At all. The whole "look how messed up this person is" all too often comes across as self-indulgent and (worse) boring. Mostly due to generic issues explored in timid ways with neat solutions of one kind or another.  At best one can sometimes see this explored in a vastly entertaining manner, usually comedy.

Then there's BED, by Sheila Callaghan and directed by Jennifer Chambers, staged by the Echo Theatre Company in Atwater Village.

I got a very nice press packet accompanying this play, but I'm not going to reference it.  No, instead I want to focus totally upon my experience as an audience member.  As my initial paragraph hinted, my expectations weren't high.  A ten year relationship told in scenes with the characters in bed together.  Sounds like a racier version of many a play I've seen in community theatres to be honest.  But I said to myself--c'mon this is the Echo!

Yeah I have a high opinion of this company.  A high opinion based on productions like this. BED has characters who defy the words (and concepts) "generic" or "formula."  Yes, we meet two people the night they spend together for the first time--Holly (Kate Morgan Chadwick) who seems a Dionysian rebel and Cliff (TW Leshner) a Romantic Apollonian if ever one breathed.  Yet they confounded expectations, even though this seeming-formula is something a staple.  But the contradictions almost immediately began to pile up.  No, not contradictions.  A better word is paradox. Because therein lies the heart of what we see in real human beings, genuinely fascinating characters.  Holly is so nihilistic, yet accepts a marriage proposal with hardly any resistance--issuing a warning that hangs over the rest of the play.  Likewise Cliff seems like such a rock of stability.  He is not.  He tries so very hard to make things right, to adapt, to support.  In truth a part of him changes with the wind, and he cannot seem to find his way.  Except, he doesn't dissolve into uselessness and impotence.  Rather, he grows into a subtle and strange courage.  Holly turns out to be a fantastic mother, despite her disdain of children.  Still, her fire burns (in part maybe to try and sear away a bit of venom in her soul--the hints of which are chilling).

Adding to all this the play eschews strict naturalism, not content with the bed (and yeah, character names) as a metaphor but with the metaphors piling up and up.  The final scene becomes totally surreal, as this couple do not (as we would expect) break up but instead enter into a new level together.  A strange, disturbing, as-yet-unexplored place seemingly full of danger and hope.

None of which would work if the cast (including Johanathan McClain as JC, Cliff's brother), director, designers etc. didn't do their jobs! The major point I want to make is how nobody seemed to hold back.  The commitment of everyone to explore this story, these people pushed a good (even excellent) script into something uniquely powerful in its own right.