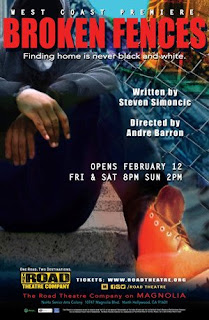 For the sake of honesty, let me note couple of the members of the cast of Broken Fences are friends.  I'm also a fan of several other cast members.

I'm not familiar with the playwright, Steven Simoncic, nor director Andre Barron, and have only seen a reading or two at the Road Theatre Company before now.

The story as written reminded me of those "well made plays" of the 1950s and 1960s, albeit with an edgier more modern sensibility.  A young white couple expecting their first baby, can afford to buy a house in an area once pretty much a ghetto but now changing.  The play focuses on this couple, along with some of their friends, in contrast to the family next door--one who've called this area home for generations.  Home.  That idea pervades the story and characters.  The search for a home, the fierce desire to preserve one, the tricky act of defining just what makes a home, plus the equally tricky question of what one does with it.  Do you set down roots?  Build a castle wall?  Leave to find/create a new home?

One thing in particular seems most impressive about the play--that it never suggests some neat answer.  Like life, such rarely exists.  We do the best we can.  This follow through even to the last moments, where Simoncic showed the great skill to allow events to give us the stopping point rather than words.  The stopping point, not the end.  Again, like life, doesn't seem like there really is an end.

Czar (Coronado Romero) and April (Mia Fraboni) begin this part of the story, moving in amidst hopes and a lot of intellectualized good will.  They even look down a tiny bit at their friends Spence (Kris Frost) and Barb (Ivy Khan) who come along to help but clearly feel nervous in 'the hood.'  Soon they come across Esto (Ben Theobald), friend of their new next-door-neighbors, who is calmly stealing from their moving van.  When the neighbor--Hoody (Bruce A. Lemon) and his fiancee D (Donna Simone Johnson)--show up, the air grows thick with awkwardness, although Hoody makes sure Esto backs off.  Adding to all this is Hoody's brother Marz (James Holloway), and the issues they have about home, family, obligation, etc.

Amid the characters, who all the while manage to avoid stereotype while partaking of many details of which stereotypes are made, what ultimately moved me most was when the play veered away from what we like to call "reality."  When characters broke the fourth wall and spoke to us, the audience, outside of any specific time and place, that was when I found myself most entranced.  But please note the word "most."  Plenty of lovely moments and details shone through, times when uncomfortable (and sometimes startlingly hopeful) truths reared their heads.  This makes for some very good theatre!  More, the overall quality of the entire cast (often not the case, let us be honest) steps up the whole production a notch or two at least.