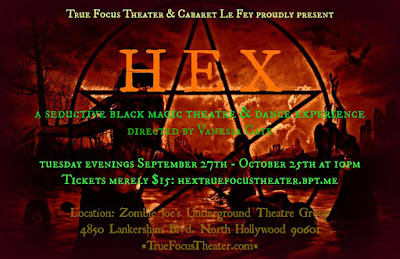 Tis the season...when the dead rise and powers of shadow call out to come dance under the pale moonlight.  Hex, the latest show from True Focus Theater and Cabaret, celebrates this with an odyssey into feminine power.

That sounds so simple, doesn't it?  I mean, the words are straightforward enough.  Their meaning, however, pulse with all sorts of possibilities...

Widows singing of their loves lost at sea.  Earth goddess Demeter bringing winter to the world in the wake of her daughter's kidnapping.  A female version of Dr. Faustus seduced by an equally female Devil (or is she Death?).  These make up just a few of the vignettes enacted during the performance, the tone as varied as the source material.

For example, Little Red Riding Hood appeared with a chorus of werewolf girls, meeting eventually an older, more powerful she-wolf.  Flirtation leads to competition, with the chorus changing sides, and Little Red meeting a fate actually better than death when you think about it.

Yet the same show portrays far more bestial she-wolves, fighting it out for the rank of Alpha, all in an impressive dance covering the stage.  The she-wolves in question, not incidentally, do not don ears or furry gloves or even fangs.  Frankly they have no need.  They become wolves in their minds, and we see that fact in how every part of their bodies move.

Likewise the same ensemble also gathers in a circle to invoke nature and its powers, the secrets of moon and season.

Soon after, a witch does the fearsome, bloody ritual pledging herself to darkness in return for the power to become a wolf.

Then there are the three witches whose nefarious dealings run afoul of a simple human error--one of them all too easily accepting local rumor as to who among the local girls is (or is not) a virgin.

What impressed me most of all was how all this exploration of the spooky never lost its grip on the occult, the mysteries of secret knowledge, the dark mysticism at the undead heart of Halloween!  The truths here unveiled cannot help but prove as terrible as they are beautiful, as potentially deadly as they can be ecstatic.  And Hex never forgets that!  Which makes it all the more enticing, disturbing, wonderful...

Given the subject matter, one should not feel surprise at learning this performance features a lot of eroticism as well as nudity.  But I'm telling you ahead of time anyway.  Just in case.