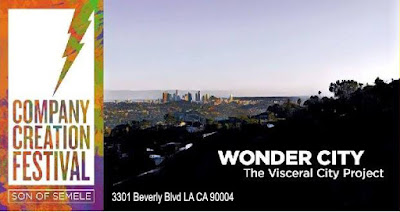 Just by way of context, I never expected to end up living in Los Angeles.  It becoming my actual home frankly never seemed a possibility.  So Wonder City at the Son of Semele on Beverly resonated rather strongly.

An ensemble work, subtitled "The Visceral City Project," it consists of one vignette after another, increasingly intertwined, about the history and life of Los Angeles itself.  The cast--Mark Hein, Stacey Jack, Christian Prentice, Melissa R. Randel, Flor San Roman, Eric Trules and Roger K. Weiss --share stories and memories as well as enacting such quintessential Angeleno moments as driving in rush hour or the periodic rousting-out of the far-too-many homeless desperately trying to make ends meet (which in practice often means simply finding somewhere for people in poor health to sleep).  Ashley Steed directed the work, which in the end intertwines so very much into a coherent whole.  Not in terms of a plot per se.  It doesn't really have a plot.  Wonder City rather than a story ends up as a portrait.  Portraits don't have plots, because they aren't stories, not really.  But when very good, a portrait does show us something more difficult--a life.

Which turns out the most important part of this play/work/event/show.  Not biography--which remains a perfectly valid thing.  Nor a description.  Rather a slice of the life of very many characters in what is after all a very large, extremely diverse city.  And the sharing in which the audience takes part works startlingly well.  For example, at one point the cast simply addressed us, those of us sitting and watching them.  They share stories about how they came to Los Angeles for the first time.  And offer their own candidates for favorite places to eat!

Less than halfway through, I found myself waiting for my turn--then recalling with a stab of real disappointment I wasn't going to have one.

Oh well, I couldn't decide on a favorite restaurant anyway... (although that fish place near Hollwyood and Western...)

Rather than give a some blow-by-blow, I want to invite you to consider the nature of that moment.  When the audience and the players merged, or perhaps more importantly, wanted to.  A moment when we shared the most powerful of all things good theatre creates--recognition.  We understood each other.  Understood what we shared.  Wanted to go on sharing.

That, in my own not-so-humble opinion, makes for a very worthwhile collection of moments.  NOt unlike a marriage.  Or a birthday party.  Maybe an anniversary.