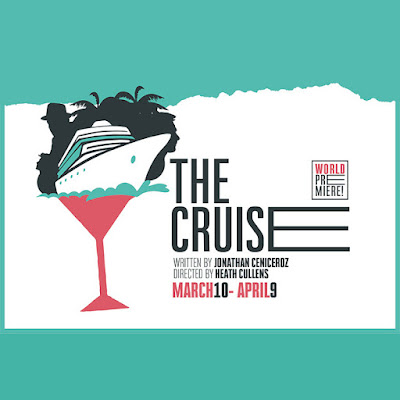 (rather more appropriate this time)


Sometimes titles of plays (or novels, short stories, etc.) can prove problematical. At least they should give a hint to the audience what awaits.  Some alas make very little sense (Other Desert Cities I’m looking at you). Others, such as the Jonathan Ceniceroz’ The Cruise at LATC end up a source of contemplation, because the title actually suggests so much.  Consider the word “cruise.”  Obviously, given the play takes place on a cruise ship, we have the simple act of traveling on the surface of the sea—as ancient a metaphor for life as boats. It also harkens to “cruising” as in looking for partners.  And to constant travel without landing anywhere, never really finding a home.

All of which makes perfect sense.  Because this play explores all that and more.
James (Kenneth Lopez) comes aboard the Majestic, a high-end cruise ship, to spend some time with his semi-estranged father Ramon (Ric Salinas), recently hired to give an entertaining lecture about native peoples in the Caribbean.  As father shows off the digs, son clearly feels uncomfortable. Part of it seems discomfort over Ramon’s unrelenting enthusiasm that reaches the level of garish. As time goes by, layers peel back and we learn more. Some of it we probably expect. Yeah, James is gay. No, Ramon did not get this job under totally above-board circumstances (he gave a false name and lied about his credentials).  All this sounds like something of a zany comedy coupled with a bonding experience between father and son so far, right?

It proves more.  Soon enough James meets Judith (Carolyn Almos) and her partner Howard (Gary Lamb), taking one of many mini-vacations aboard the Majestic.  They turn out to be conservatives who’ve come into money and now want to enter politics.  Well, Judith has and does.  She wants to help groom a Latino for the GOP nomination to the legislature.  Given this day and age, one might expect this pair to be demonized.  Not so.  At the very least, maybe a Jekyll and Hyde situation wherein an evil bigot emerges when the subject turns to politics.  Again, not so.
Given these end up coming across as charming, in many ways positive, and very much individuals, formula might call for James and Ramon to function as stereotypes.  But yet again, not so.  The layers continue to peel back, revealing surprises.
For example, James recently panicked over a long term relationship.  He feels adrift, unsure of what his life can or should be.  Ramon it turns out has a long, long history political activism—so much so it ultimately wore away at his wife’s considerable patience at his absenteeism and lack of support.  His planned lecture aims to upset the guests with extremely unpleasant truths about Christopher Columbus.

Navigating amid such shoals we find Cruise Director Boyd (Brian Wallace), whose long history with Ramon blends enmity as well as friendship, frustration and loyalty, even some romance as well as fierce judgment.  Boyd’s character seems almost designed to steal the show, with a scalpel-sharp wit and ability to metaphorically tap dance with great skill. He’s the Malvolio of the play, far from the lead but too vivid to forget and whose presence put everything else into sharp relief. Under Heath Cullens’ direction, in fact, the whole ensemble does a fantastic job of keeping a lot of emotional, dramatic and comic balls in the air simultaneously.  Perhaps what impresses most is how those balls have not at all come to rest as the play ends.  They remain in the air, although moving on to a different pattern—one we can only guess at.

Ultimately we end up with a show full of genuine and warm charm, but a charm that firmly bites.  The script brought to life cuts us, but with an extremely sharp blade—one effortlessly and almost painlessly breaking the skin to leave a delicate scar, yet without drawing one drop of blood.