More reviews of plays I've seen at the 2017 Hollywood Fringe Festival.  Each links back to the review published at the Fringe website. 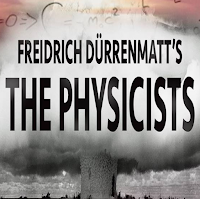 The Physicists by Friedrich Durrenmat was brand new in the early 1960s, considered a ground-breaking piece of dark humor.  The current production brings out the absurdity of it into sharp relief, which makes the whole thing even more like a weirdly funny nightmare.  The backdrop is a private insane asylum where all the "physicists" (two thing they are Albert Einstein and Sir Isaac Newton, the third really is a physicist but says he talks to King Solomon) are in one wing...then the murder happens.

The Tempest: All Woman Cast by the Say Yes! Collective assuaged my fears.  The fact is, I've seen two other wonderful Tempests in the last 48 months it seemed impossible yet another would do this (very) tricky play justice.  Yet they did!  This includes my favorite Miranda so far.  And the whole thing proved fresh, fun, entertaining and also moving (the ending and its rationale quite touched my heart).
Posted by Zahir Blue at 7:54 AM