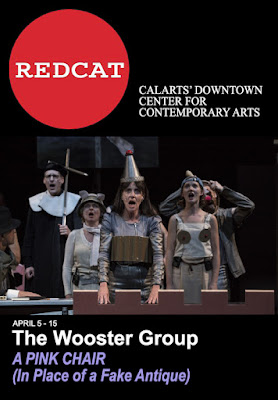 When attending events at the REDCAT rarely do I feel any disappointment.  Rather I prepare myself for delightful bafflement which most likely shall coalesce into a work to move and excite.

A Pink Chair (In Place of a Fake Antique) continues such a trend.  Oh yes.  This, the brainchild of New York's The Wooster Group, as ever challenged preconceptions from the very start.

We begin with recorded interviews with a woman discussing her late father, a famous and challenging stage director/artist.  She has agreed, as emerges in voiceover and a taped interview, to allow a theatre group access to video recordings of her father's rehearsals, especially his next-to-last play.

The press packet and program contains a lot more (and fascinating) background material but I'm just talking about the experience of watching the performance "cold."

What eventually emerges is a man playing this director taking a position on stage analogous to the director in the videotaped rehearsal--along with plenty of other actors doing the same, but for different roles.  Said video remains more or less silent, with the Wooster Group actors speaking roles and (for the most part) enacting the rehearsal with lines which may or may not have matched the original.  This fragment of a play, sprinkled with surreal details such as wrapping the director in packing tape to his chair, deals (it seems) with someone important coming--the fears, hopes, contrasting beliefs and varying emotional reactions.

Furniture is moved, characters clean or talk or pose or hold up a cross and many other things in a kind of weird dance.  Much as a dream, the flow of it all somehow seems to make sense.

Eventually, the play metamorphs into a startling re-enactment of the Odysseus' return to his home at the end of Home's The Odyssey.  But this production (which frankly I longed to see in toto) played it up as a clown show--complete with red noses and silly hats.

A theme emerged by this time, at least recognizable to me.  About one of the purposes of art--the return home.  As the daughter sought to return to her father, and her father sought to return to the Poland he thought he remembered, and others felt a judgment of themselves coming in arrival of a director, and the ancient Greek hero King finally ended his long quest after the Trojan War.  Not a simple theme.  Not a simple idea.  A wild and confused and gripping tapestry of word and sound and movement.

When the ending finally took place, media of a vast storm projected behind the cast, as the many individuals whom they each are gather aboard what for them, for now, becomes a boat or ship.  They sing.  Of course they do.  A song of journey, of sailing the sea, of braving the waves.

A song about going home.  And in the singing, they seek to belong to one another, to make a home of themselves, of this ship, of this chorus.

Such a fundamental, such a complex human urge, rendering into a new form so we may know it anew.

A Pink Chair (In Place of a Fake Antique) as of this writing plays two more performances in Los Angeles, Saturday April 14 at 8pm and Sunday April 15 at 2pm at the REDCAT, 631 West 2nd Street, Los Angeles, CA 90012.
Posted by Zahir Blue at 2:31 PM