Permit me to point out some math.  In the novel there are essentially nine major characters:  Harker, Dracula, Mina, Lucy, Seward, Arthur, Quincey, Renfield and Van Helsing.  How many are women?  Two.  If you wish to include Mrs. Westenra and the Brides, that would bring it up to six, but in that case you also should bring up Swales and Peter Hawkins--making it six out of fifteen (and honestly the Brides are only barely characters). 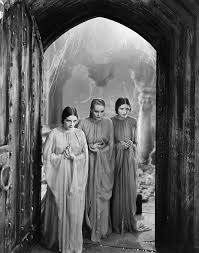 Now, here is something almost anyone involved in theatre will confirm.  At any given audition, women will outnumber men.  Yet the majority of roles are for men (all the more odd considering they make up slightly less than half of the human race).  For this reason when adapting I tend to lean toward more women and fewer men.  In the case of Dracula, one character in particular seems amenable (a lot) to change.

Several possibilities opened things up here, with that choice. One is to bring in an Attendant who should also be a woman (only male patients were supposed to have male attendants), which is another woman character I could bring in (using an unused name from Stoker's original notes). For another interactions between her and Seward has this other level on top of it, more than patient/doctor or lunatic/sane person.

Along the way I became more interested in a minor female character from the novel--Sister Agatha, the nun with whom Harker converses as he heals in the convent after his escape from the castle.  This offered another possibility--get rid of Van Helsing and have her play the role of "vampire lore expert" but in this case someone whom the men are less likely to believe.  After all, she's a woman, a foreigner, and a member of a religious faith seen as extremely superstitious by good Anglicans.  That Transylvania was part of the Austrian Empire at the time also offers another source of conflict, in the wake of a recent war against the "Hun."

To be continued
Posted by Zahir Blue at 7:00 AM