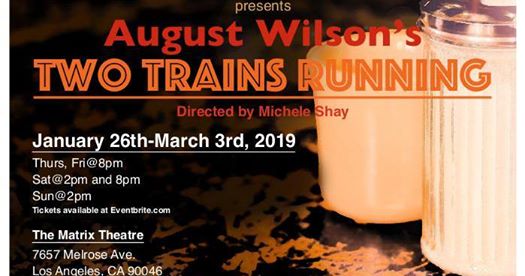 For those who don't know, the late playwright August Wilson (his most famous work is probably Fences) created a "century cycle" (also called the "Pittsburgh Cycle") of plays chronicling the African American experience in the 20th century decade by decade.  Two Trains Running takes place in the late 1960s, in a Pittsburgh diner where a group of characters work and/or gather.  More, the diner itself lies in the Hill District, once a flourishing neighborhood, now run-down and in a state of decay.

Yet this remains a time when things are changing.  Segregation had not only been banned by the Supreme Court but was in the process of actually happening.  The Freedom Riders had forced a sometimes violent change, some of them becoming martyrs in the process.  Both Malcolm X and Martin Luther King Jr. had risen, then fallen.

For the characters, though, they remember and live by both the world of the past and that of the present.  Simultaneously in two states of mind, history and (perhaps most importantly) hope.

Therein lies all the tension and plot of the play, not in one specific character arc.  Sure, Memphis (Montae Russell) seeks to hold on to his property, not parting with it until he gets the price he feels fair--and in that grim, fierce determination we see the anger and humiliation of half a lifetime.  Yeah Sterling (Dorian Missick) is looking for some kind of work, some purpose, some focus in his young life.  True, West (Alex Morris) wants to get a good deal, trying to buy the diner property from Memphis and probably feels he's being generous.

But it really feels like the play has a lot more to do with the so-called secondary characters, starting with Risa (Nija Okoro) who tries to endure and get by in a world that inspires equal and vast amounts of sympathy as well as distrust.  Then there's Holloway (Adolphus Ward) who keeps trying to get other characters to go see a mysterious elderly woman he says is centuries old yet has answers for those willing to play her price--which is to throw twenty dollars into the river.  He succeeds in getting some to do it, and the two who do arguably begin to have some positive changes in their lives.  Wolf (Terrell Tilford) just tries to have a good life as part of a corrupt system, and then just wants to survive when that system bites one of his customers, a customer who doesn't want to take anything lying down.

Yet most important, certainly most poignant, must be Hambone (Ellis E. Williams), a damaged old man still seeking a ham promised him by a local grocer a decade earlier for painting the man's fence.  "I want my ham," is his refrain, said over and over again--echoing characters like Gollum in Lord of the Rings or Dracula's Renfield, the pathetic and broken person who holds on amid injustice, a ruthless world, and mental fog to one specific sliver of hope.  He wants his ham.  He earned it.

I must point out one of my favorite moments, when Halloway says maybe Hambone is the wiser than the rest.  After all, when offered a chicken instead most of us would take it, right?  But that chicken would taste bitter.  That chicken and every piece of chicken for the rest of days.

Maybe he is right.  Maybe wiser.  And maybe mad.  Because hope can be seen as mad in this world.  Yet without it, without that surrender to hope, how else can the world change?  Even a little bit?

When I look at this play, that is what I come away with.  Hope in all its terrible sweetness, a siren voice which brings disappointment even heartbreak, yet not always.  As addictive as a drug, save this drug sometimes turns out to be medicine.  Actually, that was what drugs were invented as, right?  At play's end, I myself feel so much hope for all these people--and most of all maybe for Risa, whose backstory we never learn yet by the power of words and performance and staging we feel as wildly real.


Two Trains Running plays Thursdays, Fridays and Saturdays at 8pm as well as Saturdays and Sundays at 2pm through March 3, 2019 at the Matrix Theatre, 7657 Melrose Avenue (between Fairfax and LeBrea) LA CA 90046.