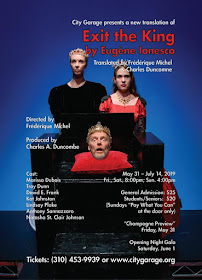 City Garage in Santa Monica ends up pretty much every year on my "Top Dozen" list.  They specialize more than anything on what I call Theatre of Dream, that is, overtly non-naturalistic even non-linear works which work best (for many audience members) when thought of as actual dreams brought to life on stage.  In our television/movie saturated world (where realism makes for a powerful tool) theatre works best when harnessing the intuitive, the unconscious.  Or so it seems to me.

Eugene Ionesco's Exit the King easily falls into this category.  We find ourselves in a weird royal court, that of King Berenger (Troy Dunn) and his two queens Marguarite (Natasha St.Clair-Johnson) and Marie (Lindsay Plake).  This palace has precisely one servant, the overworked maid Juliette (Kat Johnston).  A Guard (David E. Frank) seems to be the whole military, while a Doctor (Anthony M. Sannazzaro) completes the royal staff.

We soon learn--or at least are told--the kingdom has decayed into shambles.  Population declining from billions to thousands, crops dying, the sun refusing to show its face--these seem the least of it.  Even time has slowed down.  Queen Marie weeps, full of foreboding what all this means.  Her fellow Queen is positive the process is coming to its natural conclusion, and the Doctor agrees.  Despite Marie's begging, when the King appears they brusquely inform his Majesty of his imminent death.  He will die, they tell him, in an hour and a half.  At the end of the show.  Yes they say precisely that. 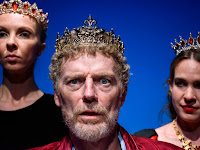 And he naturally enough goes into denial!  He argues!  He insists he's in perfect health, except for a little stiffness in his back, and some difficulty getting into his throne, some more difficulty standing, even more not falling down, still more getting up again, and so on.

Some fairly obvious possible interpretations present themselves.  None, though, really satisfy.  Is the King all of us, facing our end with the members of the court representing aspects of human life--mind, desire, body, hands, etc?  Or might this play chronicle the collapse of a nation, bleeding out its essence as a nation loses its peoples, its institutions, its self-awareness?  Maybe the whole thing is nothing more than a kind of epic romantic triangle, of a mortal man's struggle between youth and life versus time and death?

Because we are in the realm of dreams after all, with shifting identities and truths born out of perhaps not chaos but a pattern we don't really comprehend.  For example, the so-called five stages of grief turn into more like five dozen such stages--a fair number backtracked at sometimes dizzying speed.

Such a wild emotional roller coaster works, even amid the absurd details (like the claim this King is hundreds of years old and invented the wheel as well as the atomic bomb) because the cast under the direction of Frederique Michel breathes vivid life into what might easily have come across as utter chaos.  Every detail makes sense.  More, every details forms part of  a dynamic drama/comedy taking place.  From the Doctor's bizarre method of walking, Marguarite's empowered way of watching, listening, and waiting, the King's yo-yo style of ever increasing panic, even the Guard's barely-successful blowing of his trumpet--all are played to the hilt and given meaning in each moment.  We don't understand, yet we do.  We cannot say why it all makes a weird kind of sense, but it feels somehow cohesive amid the slippery nature of reality itself.

Not an easy task, but then Art rarely proves easy.  The better the art, the more effort and precision it takes. This production shows the results of massive effort and incredible precision, so much so we even go on a journey of feeling very differently about every single character from beginning to end.

Exit the King plays Fridays and Saturdays at 8pm, Sundays at 4pm (pay what you can, at the door on Sundays) until July 14, 2019 at the City Garage, 2525 Michigan Avenue, Building T1, Santa Monica CA 90404 (right across from the Bergamont Expo Train Station).
Zahir Blue at 3:21 PM
Share