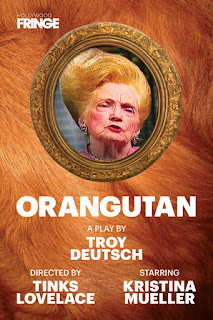 Imagine a fascinating nightmare--one of those fundamentally disturbing ones that blends all kinds of things in a weird brew of elements that somehow make kind of bizarre logic.  Now suppose a nightmare more-or-less fostered by the challenge comedian Bill Mahr put out for Donald Trump to prove he was not the son of an orangutan.

Now imagine someone staging that nightmare.  You now have Orangutan by Troy Deutsch.  The whole thing takes the form of a monologue by Trump's mother (Kristina Mueller), recounting a weird upside-down history of alternate timelines and supernatural intervention in which the woman gets a glimpse of what her child will be/become.  I ended up fascinated, horrified, amused, and often just challenged as my brain tried to wrap itself around what was happening.  In the end I stopped trying. Well, no, actually fairly early on.  Like a dream, I accepted it and took from it as such.

Make no mistake Mueller's performance riveted me, to the point where I cannot really know how much to credit director Tinks Lovelace.  This degree of intuitive precision hints of a powerful collaborative process.  Along those lines I several times thought the performance was nearing its end, only to find a new chapter open up with still more disturbing insights/images.  The play even ends with the mother describing to her son how she came to be impregnated by an orangutan.  Her smile during all this still makes me shudder.  Just as other moments made me almost weep.