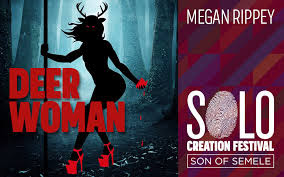 I first saw Megan Rippey perform in a brilliant three-person musical at Son of Semele.  Since then I've seen her in several wonderful performances and followed her career as a fan.  Only last year did I learn she is also a burlesque dancer, and a little later that she had for some years found within herself a kind of avatar of feminine power.  Part muse, part animal spirit, part divine patroness.  She called this being Deer Woman.

Her entry in the 2019 Solo Creation Festival at the Son of Semele explored this entity and her relation to it.  Deeply personal, it starts as a slice of life in terms of her life as a dancer.  A slice in which something is going on, something she struggles to understand.  It begins (or at least begins to make sense) with a dream--a creature/goddess walking through the woods, towering over the trees, her hooves like thunder, her face too human to be animal, her antlers like some kind of Jungian crown.

Few and far between have I found those pieces of theatre which manage to create a religious experience.  Some try and fail.  Others seek only to convince you one has happened.  A tiny handful actually achieve the same kind of experience we are supposed to feel in a High Mass, or what perhaps our ancestors felt the sun rose atop a specific stone on the Summer solstice in Stonehenge.  As a Muslim may feel when taking part in the haaj, as the worshippers of Dionysis felt when running in the woods, as some Christians feel when they start speaking in tongues--this one woman show achieves precisely that.  No small feat in a full length play.  She did it in half an hour.

After Rippey allowed Deer Woman to speak through her just once, the final moments of the play transported me (and I think the rest of the audience as well).  Via sound and lighting what had been but a black box theatre doubling for a bar with burlesque dancers became a primordial forest, sometime between day and night.  In that perpetual dawn and dusk, we waited and felt who was to manifest before us.

She entered.  And for a moment, I felt the presence of god.  Not my god to be sure, but a fragment of the transcendent Source through the lens of an artist who shared her vision to the world.

Deer Woman has already closed as of this writing.  However, I have high hopes Rippey shall mount it again and again.  Watch for it.