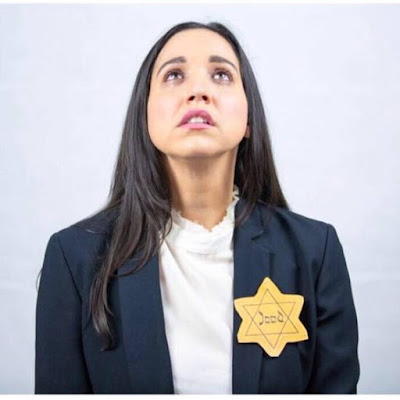 "Shiva," as explained by writer/performer Rachel McKay Steele, is a Jewish ritual of mourning, to help the bereaved embrace and thus get past their grief.  Doing so for a girl one never met, who has been dead for many decades (she would have been ninety years old in 2019) may seem bizarre.  Until one thinks about it.  Ultimately shiva is not "for" the deceased.  It is for those who feel the pain of their loss.

So, Shiva For Anne Frank makes plenty of sense, really.  Her diary lets us know her, and in retrospect grieve.

One does expect such a one woman show to feel solemn, even tragic.  Steele instead opts to make it funny!  Irreverent!  Racy, even!  Which, again, makes plenty of sense given the contents of the famous diary (especially the unedited version, revealing the teenage girl's more "adult" thoughts, including her attraction to women).  So what we experience emerges as a life story, that of Steele herself, growing up Jewish in the American South who after moving to New York and also re-reading Diary of Anne Frank sans edits, found a kindred spirit as well as validation for all the things about herself which spark condemnation.

It is indeed funny, with a sharp-tongued humor one expects of a good comedienne.  It is indeed racy, with her frank discussions of sex.  More, the humor increasingly reveals itself as what humor so often is--our way to keep from screaming, or weeping, or both.  For this performer/writer, as for all of us, that humor feels needed more than ever.  Because as she does in fact unmask towards the end of this solo play, her rage is very real.  Very justified.  Anne Frank is very much like Steele, and the mind set which fashioned the atrocity of her casual murder--just one more innocent teenage girl among millions--are very much like what is happening today.  In fact, one of the most powerful aspects of this performance is now we ourselves feel the same tear-stained rage as Steele by the end.

Because shiva is not for the dead.  It is for the living.  Not for the past, but the present and the future.  The talented glory that was that girl hiding in an attic in Amsterdam was snuffed out long before her time, but the evil that did it remains.

And we have no excuse any more for not recognizing it.

Shiva For Anne Frank has completed its run in the 2019 Hollywood Fringe Festival.  However, I strongly believe and hope it will be mounted again in other venues.  Keep your eye out for this powerful, entertaining, moving and yes, funny work of theatre.
Posted by Zahir Blue at 10:13 AM