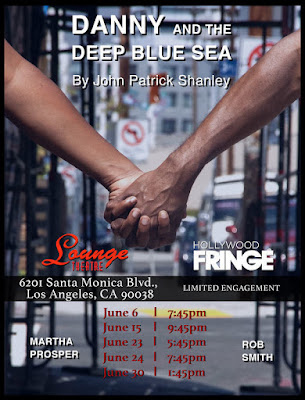 Contrary to all sorts of "common sense" you can quite practically put all sorts of spectacle onto the live stage.  Sea battles, exorcisms, poisonings, gunshots, sword fights, etc.  If you have the budget, dragons and falling chandeliers are not out of the question.

But who cares without the human connection, the power of the human soul coming to terms with itself via contact with another human soul?  Movies and video games cannot help but eclipse live theatre for spectacle.  It can almost never approach the power of an actual human presence.

Such is the power of John Patrick Shanley's Danny and the Deep Blue Sea, and brought out so vividly in the production starring Martha Prosper and Rob Smith.  It starts in a bar and ends in a bed.  Along the way two lonely, hurting people run the gamut of guilt, rage, shame, joy and finally hope which flesh is heir to.  Like a drop of pure concentrated plutonium in its power, but in this case that drop contains undiluted Life.

A man and a woman, all by themselves.  To be fair, maybe others are visiting this bar, but we don't see them and honestly they don't matter.  Our story is their story--two people with secrets, secrets that cannot but emerge.  Secrets do that.  They leak out.  They bubble up under pressure.  We were mere thinking machines that would not happen, but humans have passion.  Or the capacity for it.  The need to feel something, like a thirst to be slaked.  What these two actors do is reveal the full range of those passions, wrapped up amid feelings of horror.  Yet also, they feel hope.

So the two hurting souls use each other like bandages, bleeding into each other and in the process letting a little bit of healing take place.

But then...oh, but then...one of them refuses to let go of that hope.  They had pretended for a time, wallowed in the joy of what this encounter might become.  In the morning, one of them does the most powerful thing they could do under the circumstances.  One of the two refuses to sink back into hopelessness, simply because it is expected, even "normal."  It should read as pure sentimentality.  A naive twist we should find unbelievable.  Yet these characters are well written, so specific in who they are and what they want and how they react to the world around them--and the cast of actors combine enough skill and talent to breathe them to such life--we believe it utterly.

Danny and the Deep Blue Sea was part of the 2019 Hollywood Fringe Festival and I eagerly await the next shows done by these actors.