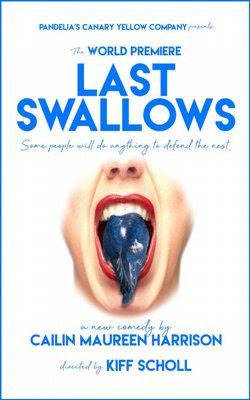 Okay, must confess right from the start playwright Cailin Maureen Harrison and director Kiff Scholl are friends of mine.  My respect for their respective abilities led me to expect quality when going to see Last Swallows.

Mind you, I have felt disappointment this way before...

Not this time though!  What I found going in, to my ever-growing pleasure, proved a profoundly moving family tale, a mini-epic focusing on the intimate, the little stories and dramas (and comedies) which make up most of our lives.  The experience felt poignant, infuriating, often funny, but in the end hopeful and forgiving.  Even grateful.

Which frankly seems what the characters went through as well.

Essentially the plot deals with elderly couple Elizabeth (Shaw Purnell) and her bird-watching husband Robert (Bob Telford).  The latter's periodic references to swallows, their migratory patterns, as well as his concern (to the point of some real confusion now and then) for some individuals gives the play its name.

They have three children--Julia (Tina Berckelaer), Caroline (Abby Eiland), and a middle brother Thomas (Ty Mayberry).  As with some families, sibling relations in this case veer towards combative, assigning blame, almost deliberate miscommunication, with someone functioning as a mediator (and in the process somewhat stifling their own maturity).  Each has a spouse--Edward (Matthew Downs), Simone (Leah Zhang), and Moira (Leilani Smith) respectively.  Each act focuses on how this believable, often amusing, at more often infuriating dynamic plays about as their mother seeks to get the whole family together for a vacation together this year.  She feels keenly, and sadly the tensions that keep them apart.  Besides, as becomes gradually obvious, a ticking time bomb awaits which means their possible time together must approach an end.

Now, the content of this deeply human family drama/comedy generated more than a few moments of personal recognition.  Let us say I am middle brother between sisters myself, and saw my own family's tension go unaddressed for too long.  But that is me.  Other specific details methinks resonates with others, because it highlights a wide variety of how humans interact with each other, especially when close (or hoping to be, or hoping to be less so).  I am notoriously stingy when it comes to standing ovations, while other members of the audience felt otherwise.  Small wonder!  The cast, directed by someone I already know superb at his job, brought this script to life with great skill and emotional truth.  This last frankly makes up a lot of what acting skill must be.  Telling the truth.  Even if that truth is make believe.

(Paranthetically a friend recently asked how good actors manage to create some powerful real moments which do not reflect anything of their own lives?  I answered "Actors pretend really, really hard--the way children do, but with the discipline and experince of adults."  This cast show off exactly that.)

I really want to also praise the play's style.  Eschewing anything like a box set with its nailing down of all action to one location, this play goes much further than a mere black box.  Rather the suggestive, rather lush set suggests a rich tapestry of life and homes.  People shift from location to location with minimal shifting of set elements--and often with scenes happening simultaneously!  This, the kind of thing only live theatre can really pull off, added to the power and beauty of the experience.

What I am not doing is telling how the story proceeds nor how it concludes, despite the warning above.  Rather let me say the odyssey of this family left me feeling I had taken the journey with them.  As the lights faded at the very end, I genuinely felt a tiny bit older and wiser for having lived a little bit of their lives.

Even though, of course, these lives never happened.  But that is what we mean when we talk about the Magic of theatre!

Last Swallows play Fridays and Saturdays at 8pm, Sundays at 2pm until October 20, 2019 at The Other Space (part of the Actor's Company) 916 A North Formosa Avenue, West Hollywood, CA 90046.

(Paranthetically a friend recently asked how good actors manage to create some powerful real moments which do not reflect anything of their own lives? I answered "Actors pretend really, really hard--the way children do, but with the discipline and experince of adults." This cast show off exactly that.)

Bill Smitrovich ( Shaw Purnell is the spelling by the way )