The 7 Stages of Grieving (review) 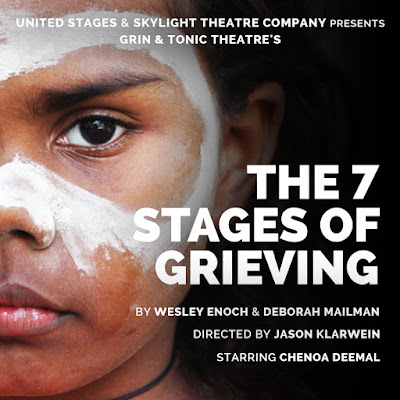 Forgive the mini-lecture, but theatre has its origins in religion and ritual. I have said this again and again, when given to pontificating and/or while directing.  But The 7 Stages of Grieving demonstrates this almost perfectly.

Originally presented in Australia, written by Wesley Enoch and Deborah Mailman, this one person show focuses on the Aborigine experience in the wake of English imperialism.  It is anything but a lecture however.  Nor does it come across as some esoteric recreation of an ancient culture.  Rather Chenoa Deemal portrays a young woman living in today, haunted and shaped by yesterday, not knowing yet what tomorrow may become.  Her story is not about the past, or present, or future but all three.

We begin with a circle made of shining sand, poured onto the stage by Deemal.  She will make more circles as her story reveals itself, her history peaking through mundane details.  Some of the sacred (as ever) remains unseen one way or another.  A box of photos amid a vast gallery of family members, that box of those who have left this world--and wait to be remembered.  Tiny piles of aqua stones representing families and bloodlines, one pile chillingly taken away and outside the circle.  They are the children stolen by the English, denied their past and families.

Oh, would it not be wonderful to think that something we could no longer imagine happening!

The performance does not enumerate any specific seven of anything at all.  For one thing, seven seems too tiny a number.  Surely each human person, not to mention each human culture, contains many multitudes of such.  So we see.  Fear and horror.  Rage and despair.  Remembering the terrifying strangers who came and took your children away.  Discovering an old woman who, lacking a family she knew to be her own, cheerfully goes to funeral after funeral after funeral of strangers.  They might be hers, after all.  Who's to say?  An American pop song of loss and melancholy delusion.  The memory of a nation officially apologizing for its past acts of evil.

Calling this performance a tapestry feels right.  But so too does it seem a nebula, or even galaxy of life and longing, memories sweet and bitter.  Just as it is also an explosion of too much history, pain, and loss for anyone to grasp.

As well as a series of circles and patterns of brightly colored stones, a shape created from the interplay of the world and human experience.

All of which boils down to saying the whole performance resonated with me as a Christian Mass is supposed to, as well as the Haaj (the Muslim pilgrimage to Mecca), or the telling of the bondage in Egypt on nights of the Passover.  It was the sacred, the ineffable, but rendered in word and movement with light and sound and color.  A ritual, in other words.  Purely that, with all the power such is supposed to invoke.