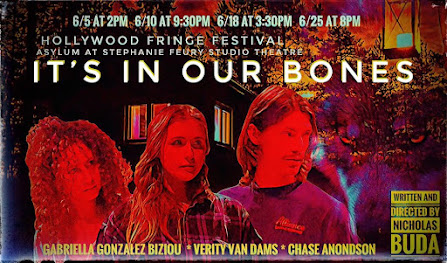 One of my favorite shows in this year's Fringe, It's In Our Bones blends myth and family, heart-ache and mystery to final crescendo of strange but powerful truths.

The play itself, written and directed by Nicholas Bruda, blends dreamlike myths and gritty emotional realism in its tale of two sisters who independently go to the family cabin in the woods to try and deal with...life. Gabriella Gonzalez Biziou  is there first, composing what she hopes will be the perfect suicide note.  That might seem darkly funny, but believe me, is not.  Nor is it supposed to be.  Rather it feels daunting.  When Verity Van Dams Valdez then shows up, unaware her half sister was there or even alive, emotional battles surge forward like a series of tides, pushing the two into...what?  The rocks?  Into some kind of storm?  Working together?  All that and none of it?  Then of course there are the wolves, the owls, and the winds.

Chase Anondson then arrives, who says he knew the sisters' late brother.  He also says that brother told him The Secret.  About this family.  Which they alternately deny, accept, refuse to discuss, then confront, followed by new admissions.

It makes for an emotional tempest of subtext on top of more subtext, gyring into a conclusion I adored.

To be fair, I feel the ending did not quite 'land' but that seems to lie in the fact the play feels too short.  Mr. Bruda told me twenty minutes were cut to fit into 55 minutes, and I for one want desperately to see this cast perform it unabridged.

It's In Our Bones plays Saturday June 24 at 8pm at the Stephanie Fleury Studio 5636 Melrose Avenue.