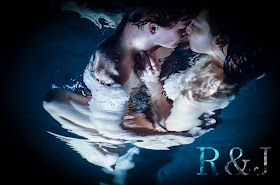 Last year I reviewed the Mine is Yours theater's gender-swapped production of Shakespeare's Romeo and Juliet. I had a mixed reaction to it. Now they've re-imagined that production for the 2015 Hollywood Fringe with a somewhat different cast and noticeably different staging and approach.

The new R&J, about the star crossed lovers Romea (Mary Ellen Schneider) and Julian (Dane Oliver), is much improved! In fact, the chemistry between these two actors is one of the major highlights of the production--that and the often-startling ways their love is portrayed. I don't want to spoil anything (despite the above disclaimer) but the moment wherein they meet is fairly electric--and tellingly, from that moment on the hitherto rather callow Romea begins to act in a more adult manner. She starts to show promise of what a very fine young woman this teenager might grow to be, if only.

If only. Two little words that might as well be engraved on one of the two theatrical masks. We've all seen this particular Shakespeare play many times, but kudos to the cast and director Abby Craden for making us feel that tragedy in the gut. In fact, that seems to be the reason for the gender switch. It makes us see the work anew. When Julian is treated as a sex object, we aren't used to thinking of that in relation to a teenage boy. When Romea stabs Tybalt to death, the rage involved feels different when fueled by feminine energy.

This means that (for the most part) anything about the matriarchal nature of this world simply never ends up explored. Which is too bad.

But on the other hand the world of this play does exist, does feel consistent (using Julian as a maypole in a party--and his reaction--was a nice and disturbing touch), especially in the interplay of characters. The gangs of restless young women such as Tybalt (Cj Merriman), Mercutia (Taylor Jackson Ross in one of the plum roles of this play) and Benvolia (Hannah Pell) to whom Romea belongs were much better realized than the same in most other productions I've seen--which involved young men of course.

Alan Blumenfeld as the Nurse and Katherine James as Sister Laurence also stood out, lending a gravitas to older individuals who understood yet remained in some sense baffled by the leads.

I genuinely would say this is my favorite live production of Romeo and Juliet. Perfect? No. But it works, it holds my attention and twists my heart.