The Inside Edge of the World (review) 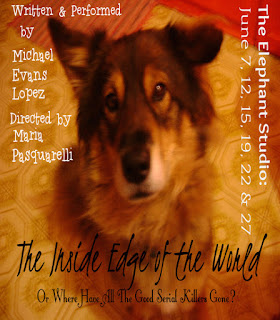 Here is the official blurb for The Inside Edge of the World (Or Where Have All the Good Serial Killers Gone?):

A lonely criminal forensics enthusiast stumbles across a serial killer in his own neighborhood. With the help of his dog, they set out to study the man, but get a little too close. It’s kind of a cross between Rear Window and The Dog Whisperer.


This doesn't really convey the rather wonderful  one person show enacted by Michael Evans Lopez.I myself have a taste for the odd and beautiful, the lonely outsider who tries to do good. Which makes me very nearly the target audience for this show!

Lopez begins in a way that gives a pretty clear "taste" of what is to come. A conversation in the dark I first took as between brothers, one of them much younger. Then, as the lights arose and I saw only one figure curled up as if in bed, my mind went to the idea of multiple personalities. As the conversation proved quite human, if eccentric, and ultimately rather touching this gave promise of something special.

When I eventually learned one member of the conservation was the central character's dog--I smiled.

As it happened, quite a few smiles crossed my face as the story went on. Different kinds of smiles, to be sure. The smile that goes with hearing something so bizarre it has to be funny, a smile at the friendship between man and dog, a smile in strange harmony with sad weirdo awash with a poignant madness. And while the script did much, the bulk of the effort in generating those smiles lay with Mr. Lopez. In particular the open ended moment of revelation making up the play's climax only worked because the fifty minutes of performance that preceded. Without our understanding of the central character, it would have fallen flat.

But we did understand. And as a result another smile, as well as maybe a tear, arose.

(Quick note: I do think the title of the play is a bit dull. I had trouble remembering it. The secondary title has a lot more zing, at least to me.)
Zahir Blue at 10:47 AM
Share