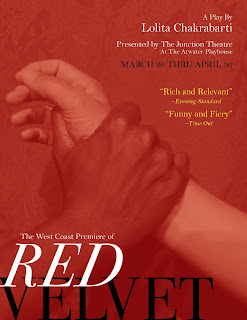 This is a play about an actor. A real one.  His name was Ira Aldridge, and in the 1860s not only did he count as a theatrical superstar but he was the highest-paid artist in Russia. He was not Russian, however.

He was African American.

Paul Outlaw portrays Aldridge in Red Velvet, by Lolita Chakrabarti, set (mostly) in 1833 London when Aldridge became the first man of African descent to play Othello on the London stage.  As you might expect, it caused a furor--not least because the British Parliament was debating to end slavery in all of England's territories.  Like most of the cast of this show, Outlaw did a wonderful job in portraying the complexity of his character.  What made it particularly outstanding is that we also get to see his Othello--not a modern Othello, but a Regency-Era Othello, with the elaborate poses and hand gestures.  But also--and this must be crucial--this was a very good Othello. 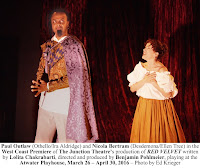 But there's a lot more to the play than that, essential though it remains that we see how good Aldridge really is, understand just how viciously unfair the critics were to him.  At least the London critics.  In fact Aldridge toured Europe for almost three and a half decades afterwards, lauded and acclaimed.  When he died in Poland in 1867, he was playing King Lear.

Yet he never returned to the West End.  As successful as he was, beyond doubt, the past haunted him, ate at him.  What Red Velvet does in re-telling this great actor's story is more than a character piece, more than a political tract made drama.  At heart it captures a real sense of the human in history, the price imposed by injustice when we allow it take place.

Of the rest of the cast I want to single out three others, who gave us a vast amount of nuance, that sense of what makes story and character feel like truth. 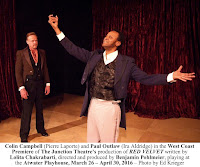 Nicola Bertram portrays the great actress Ellen Tree, Desdemona in the London production and very much of the Old Classical School of the time (debate among styles of acting remain ongoing and evolving over the centuries).  That she finds working with Aldridge exciting, and is willing to take his lead, could have made her no more than a stereotypical rebel.  Neither the writing nor the performer allowed that to happen.  She remained very real and complex, doing what mostly we all do, seeking to constantly thread a metaphorical needle without ending up losing some blood.

Colin Campbell plays Pierre Laporte, the manager of the Royal Theatre, whose idea it was to hire Aldridge, an old friend.  Again, this could easily have ended up a hypocrite or coward, but instead we get a full blown human being caught in what turns into an impossible situation. 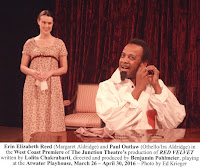 Likewise Erin Elizabeth Reed plays Margaret, Aldridge's English wife.  The play gives a hint at what a remarkable woman she was--among other things, raising her husband's illegitimate children as her own--and that quiet strong patience is often under-represented in drama.  It frankly is often harder to portray, but here--again, in terms of script and performance--we see it brought to life.

All of which comes across as a bit of a lecture on theatrical form, but I'm a nerd that way--and the way this play via word as well as deed brings this story to us impresses me mightily.  Not a perfect production to be sure (the blocking was below average for example) but at its breathing heart is a subtle and powerful script the cast does indeed make real.  We are left not with a piece of propaganda about racism, but instead the kind of contradictory truth of which human beings are made--which makes the racism so central to the plot so easily recognized.  Yeah, I've seen that.  Oh, yes, that too.  From both sides, if we're brutally honest.

In the end, I"m going to keep the story of Ira Aldridge as part of me for the rest of days.