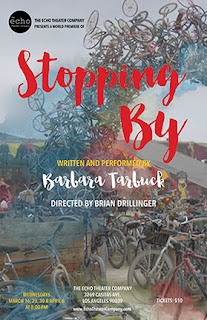 The title of Barbara Tarbuck's Stopping By, a one woman show by the Echo Theatre Company, comes from a character she describes, an Irish barman.  Upon a diagnosis of inoperable cancer, he closed his pub and headed back to Ireland.  He tells a friend "We're all just stopping by, aren't we?"

Personally I find a vast, simple comfort in those words.

I found even more comfort, often unexpected, in her show.  The publicity for it reads:

What interests me is how that doesn't describe the story to me at all. Yes, the character does go to Burning Man and indeed that makes up quite a bit of the show's time.  Yet the opening moments set the tone, and set an indelible mark.  To me, this was a story of an older woman seeking a way to endure, learn and grow from the sudden (but far from instant) death of her beloved husband.

That part of the tale is almost a horror story, as this man's mind shifts and twists under the pressure of a stroke, turning him into someone he absolutely loathes being.  Naturally, he lashes out.  Just as naturally, his soon-to-be widow resents it and mourns, seeks to find some way past events.  She gently floats when she can in the memory of their lives together.

Burning Man comes after she's given the ashes, and decides to take them to that event of which their son told them.

And at Burning Man, other memories bubble to the surface as she takes part in that primal festival/party/celebration.  Memories good and bad, innocent and guilty.  She comes to her resolution, her acceptance and forgiveness of her Beloved's death.  Yes, it was about Burning Man, but mostly it was about rhythm and cycles and patterns we come to understand not in our brains but in our very blood.  It felt to be about death, about forgiving our loved ones for dying, and for the universe for killing them.

Along the way, forgiving ourselves.

I liked it very much as perhaps (hopefully) you can tell.  And I recommend it highly.