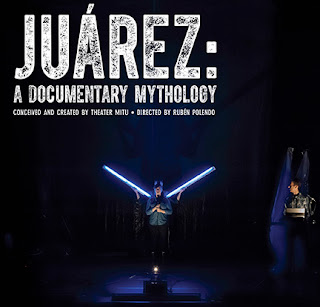 
Live theatre enjoys one enormous advantage over film or television – it stretches an audience’s imagination.  Instead of special effects or a meticulously recreating of facts, theatre depends on us engaging our mind’s eye.  Juarez:A Documentary Mythology demonstrates this with great power.  Power to move, to see what in fact is not at all there, to feel at home somewhere we ourselves have never been.

I myself have never been to Juarez, Mexico.  Yeah when reminded I remember hearing it called “Murder Capital of the World” and maybe way back in the 1980s I might have spotted it while hugging the Rio Grande en route to California.

But this show, with an ensemble not so much telling the story of what happened to this small city as invoking it, made me feel as if Juarez were somehow my home.  During the course of simply (or not so simply) relating how a wide variety of citizens there experienced it, in their own words, the audience became part of that history.  Not in terms of blame (although there’s plenty of that to go around).  Neither in terms of heroism (ditto).  But the raw experience of a trauma I for one hope never ever to feel in real life.  Just as a medieval passion play sought to recreate the Passion of various Saints, so too does this performance.  We endure a martyrdom of sorts, together, sharing in a horror which in truth wasn’t physically present at all.  We become the people of Juarez, not in flesh or history but in our hearts.

Director Rubén Polendo, who also conceived this project, provides an entry into his home town which changed so vastly after he left to attend University in the United States.  As explained in a recorded voice-over, he sought to re-acquaint himself with Juarez.  The company of actors -- Kayla Asbell, Denis Butkus, Adam Cochran, Justin Nestor, Attilio Rigotti and Corey Sullivan – ended up using a thousand theatrical tricks to throw the focus away from themselves and back on the stories to be told.  Horror stories of normal people swept up in events sometimes baffling, sometimes easy-to-understand, always beyond individual control.

Maybe there lies why this dazzling display ends up so emotionally compelling.  Vampires and zombies make for safe terrors.  Not so drug cartels, random violence, police corruption and ruthless apathy.  We know those monsters to be real.