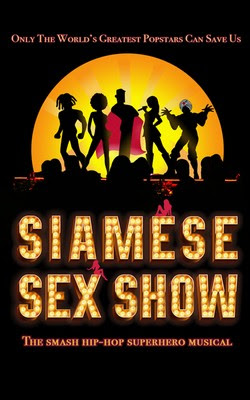 Watching Siamese Sex Show, I had the weirdest sense of deja vu.  Odd really, because yes the show is set in the future.  And more, its style remains firmly hip hop.  Yet I kept getting an 80s vibe, a la The Rocky Horror Picture Show or Phantom of the Paradise!

Consider that a clue as to just how positive this review is going to prove!

In essence, we are in a world where a corporation has pretty much taken over the entire Earth, but the evil CEO (Keith E. Wright) wants more.  It isn't enough to have wealth and power over the entire human race.  No!  He means to turn every single person alive into a personal slave!  It all depends on the proper marketing of the latest invention, which will allow human beings to experience sexual pleasure sans any physical intimacy with any other human being.  Think about that for a second.  And shudder at the genuine depth of evil it represents, way more real than mere desire for political office.  Worse certainly than any supervillain in any recent movie, no matter how fun! 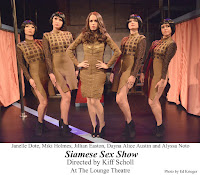 Adding to the cast are in effect two sets of narrators--MC (Isaac Cruz), and the svelt/sexy Board of Directors of the corporation (Dayna Alice Austin, Janelle Dote, Miki Holmes, Alyssa Noto).  Add to this a robotic rock star Cherry (Erin Rye) and the President of the United States (Todd Waring).

But a bare description of all this doesn't really cover what makes this show so very appealing, so very insightful.  For one thing, the plot is anything but straightforward.  It does more than a few curley-cues along the way, usually in the wake of a series of revelations.  Now, seeing as much theatre as I do, one thing I long for but rarely get is a genuine surprise on stage.  This show gave me one lovely little twist after another--even the ones I saw coming had an element or two I didn't expect! 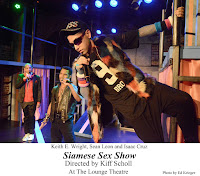 Apart from the genuinely fun musical numbers, the very good and expressive dancing, the energy a show like this needs and the very real success it achieves in creating its own world that somehow still feels like it has something to do with our own--apart from all this Siamese Sex Show does something fairly rare.  But excellent.  It does not pull its dramatic punches.  Yet it does not become cynical.  Not once.  Lots of genuine tragedy makes its way onto the stage, real humiliation and moral complexity.  Nobody among all the characters is without sin, often carrying a fair amount of blood on their hands.  Two of our heroes are actual murderers.

Yet hardly anyone save the CEO is really evil--and he comes across as a major league sadist and sociopath.  The real thing, not exotic and lame versions seen on police procedurals--he thinks your life is a toy for him to enjoy.  But part of his real and terrible evil is the way he's corrupted others. 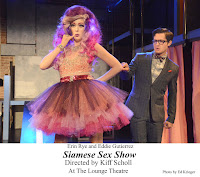 Still, the story is built around hope.  The hope that we can choose.  The hope we can--with some luck, but especially if we act together--make a difference.  Love can be real.  Evil does not always win.  Truth exists.  Redemption happens.  Sometimes what is broken can heal.

Not what we think of when we hear the words "a hip hop musical."  But one of the many little things I like about this show is how it confounds that expectation among many.  Siamese Sex Show manages that rare trick of threading a needle, blending entertainment and really thoughtful storytelling, winning high marks for both. Call in zany.  Call it mind-bending.  But never forget to also call it Art.