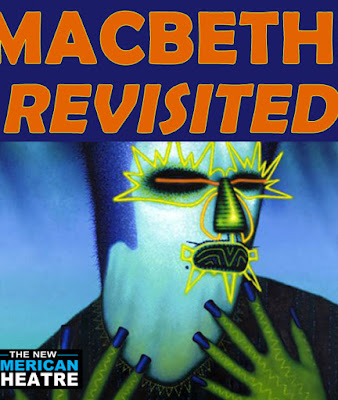 Macbeth Revisited is from the same people who last year created the single best version of The Tempest I have ever viewed.  So we are talking about a mighty high bar already set up.  Coupled with the fact I saw a really excellent production of this same play by the Vagrancy only last October!

The result?  A profoundly interesting and extremely specific production.

Maybe that last needs a word or two of explanation.  Macbeth remains a weirdly ambiguous play, because so many details Shakespeare refused to include in the text.  Instead we get a series of hints, clues, possibilities about the story behind the story.  Who are the Witches (Brendan Brandt, Dennis Gerston, Jordan Lund), really?  Are they instruments of Fate or Temptation?  Is there a difference?  Between the two of them, are Macbeth (Jack Stehlin) or Lady Macbeth (Vanessa Waters) really in control at any one time?  What sort of a man is Macbeth?  We never meet him before the scene with Banquo (Susan Ziegler) and the Witches, just hear tell of his prowess in battle.  Likewise we are given little or no information about King Duncan (David Purdham) or his heir Malcolm (Jade Sealey) much less characters like Ross (Varda Appleton), Lady Macduff (Elise Robertson) or Fleance (Frannie Morrison). 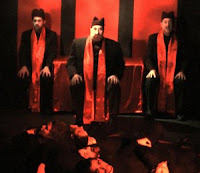 What the entire cast does is bring precise choices to all this, which in turn makes everything extremely vivid, feeling as real as taxes...or death.

On top of all this, the play itself--which is frankly weird, with its semi-barbaric setting and echoes of mythology in every corner--feels even less realistic than most of Shakespeare with all that heightened language, iambic pentameter, etc.

Right now, Macbeth seems to be undergoing a renaissance in American Theatre--in part (at least) due to last November's presidental election (some companies are saying as much).  That general point becomes clearer and clearer as this fascinating show proceeds.  The truth is, we feel a disconnect when the title character walks on stage.  He doesn't look so fearsome.  Gray-haired and slender, he doesn't look like a ferocious warrior as described earlier--a man who split his enemy from scrotum to skull in one blow!  But he does arrest the attention, not least because his eyes, his stance, his every gesture and word give hints of a secret life on the verge of breaking loose.

Indeed, as the play goes on, this Macbeth increasingly frightens us, more and more seems capable of any crime, any atrocity--more, quite willing to enjoyit.  The world of this play certainly contains supernatural evil, but what we come to know beyond doubt is that this King allowed that evil inside.  He gave himself to it, and vice versa.  Thus Scotland and its people bleed.

Macbeth Revisited plays Fridays and Saturdays at 8pm through May 13, 2017 at the Second Stage at Sacred Fools Theatre, 6320 Santa Monica Blvd (at Lillian), Hollywood CA 90038.