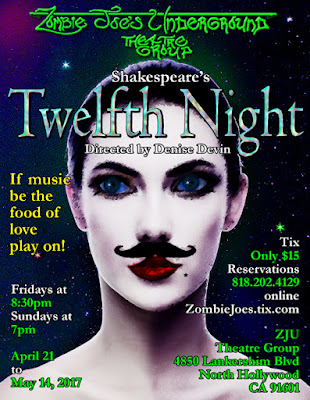 Disclaimer: The director of this production is a friend of mine who asked me to design a postcard for this production, which I did, for pay.  That is the poster art pictured here.  I was given a few adjectives, a few images and then we came up with something without my having seen a single rehearsal.

This year's production of William Shakespeare's Twelfth Night (which refers to the twelfth night of Christmas, a holiday time where people get to pretend to be someone else) at ZJU marks close to the thirtieth or so I've seen over the years.  One of the best plotted and charming of Shakespeare's comedies, this one remains startlingly modern (i.e. current) century after century.

It also contains a few traps--ones mostly avoided by this production, sometimes with great aplomb!

At heart the play tells of a set of brother and sister twins--Sebastian (Tomas Dakan) and Viola (Branda Lock)--who each believe the other drowned in a shipwreck.  Viola disguises herself as a boy to make her way in the strange land of Illyria.   Not surprisingly she ends up looking exactly like her brother!  Thus hangs a plot of love, gender, confusion, passion, deceit, cruelty and a fair amount of song.  Plus dance!

Using the name "Caesario" Viola begins working for the local Count Orsino (Nick Abrell), a young nobleman pining for the countess Olivia (Zoe Canner) who remains in mourning for a lost brother.  Her household ends up where most of the story takes place.  One the one hand we have Caesario pleading for "his" master's case to Olivia, who falls for the "young man" almost immediately.  Yeah, you can bet at this point sooner or later she's going to meet Sebastian with hilarious consequences.

And yes, they do prove hilarious.

Olivia's uncle Sir Toby Belch (Roger Weiss), a kind of proto-Falstaff, dwells with his niece and has taken up with a foolish knight by the name of Sir Andrew Aguecheek (Zack Zoda) who also seeks to woo the Countess.  Meanwhile her servants the maidservant Maria (Nicole Alexander) and the fool Feste (Kelsey Arnold) round out the household.  They pretty much unite to play the most elaborate and vicious--as well as funny--practical jokes of all time on Olivia's steward Malvolio (Kerry Kaz).

Just to round all this off, we get Antonio (Carlos Chavez), the sailor who saved Sebastian from drowning.  I have longed for literally decades somebody somewhere to go full throttle with what this man's lines imply, about how much he adores this handsome young man, giving him money, defending him from the slightest hint of danger, even putting himself in danger on the lad's behalf.  At last--somebody finally made it absolutely clear we have a gay love story right there in the text!

Most Twelfth Nights are out of balance, giving too much or too little to one or more of the major plots, but this one proves different--resulting in a uniquely and startlingly funny show!