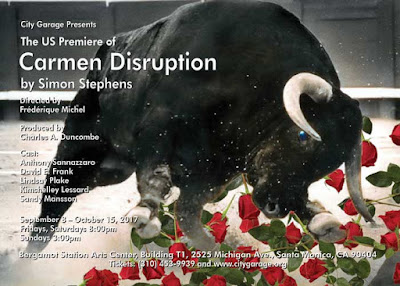 I count myself lucky to find myself on the list to see shows at Santa Monica's City Garage, where theatre routinely eschews the naturalistic for the ritual, the realism of cinema in favor of the dream made flesh.

Carmen Disruption by Simon Stephens, makes for an excellent example of this.  The play takes as its template Bizet's Carmen, with a Performer (Kimshelley Lassard) coming to some unnamed city to play the title character in a production there.  But she feels an increasing loss of identity, traveling over and over again to play the same role.  In between snippets of song, she begins asking questions about her own name, where in fact she is right now, has she been here before, where does she live?  Her own identity seems dissolving in a modern world with easy travel and mass communication, but lacking...what?

Likewise she notes how the same people seem wandering into her view, different individuals but somehow ever and ever the same characters as those in Carmen.

There's Carmen (Anthony Sannazarro) a charming gay hustler hurt and lost, someone who clearly sees himself as inherently desirable, eager for pleasure, in control -- yet subtly fragile, simply waiting to become a victim.

And Michaela (Lindsay Plake), a depressed young woman contemplating suicide after her boyfriend left her.  Why did he do this?  Well, that in a way is what all her contemplations and words focus upon, coming up with one answer after another, each different and pretty much none of them mutually exclusive. 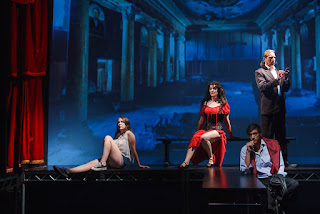 Don Jose (Sandy Mansson) is a taxi driver, frightened then frighteningly obsessed by her abandoned son, finding in such obsession a kind of joy and purpose.

Then there's Escamillo (David E. Frank), a famous bull fighter in the original but here a not-very-honest futures trader finding himself on the edge of a emotional precipice, without understanding why.

Each of course echoes the characters in Bizet's classic, demonstrating with an old fashioned form of media (opera) how modern media (their mutual endless checking their iphones and the like) isolate themselves from the rest of the world.  Not necessarily because of media!  That merely stirs up what is already there.  At least, for example, Michaela proves able to connect to others for example.  She in fact seems the strongest of them all by the end, perhaps having met her demons head on in a way the others have not.  On the opposite end, the Performer seems at the end to simply lose all perception of the world.  The other three all seem to be on roads that could easily spell personal disaster on many levels.

Or so it seems.  In truth, for the vast majority of the show (nearly two hours) characters speak not to anyone specific but rather to the audience, making us utterly passive members of the cast.  Passive because we don't get to tell our tales, nor ask any questions nor offer one word to these five people who keep spewing their souls in front of us.

Are these people us, in the same way they are in a quite real manner their counterparts in Carmen?  Such ends up as the challenge facing we the audience, a subtle but deep interaction -- providing we listen hard enough.  Which seems rather the point.

Carmen Disruption plays Fridays and Saturdays at 8pm, Sundays at 3pm (pay what you can, at the door) through October 15, 2017, at the City Garage, Bergomot Station Arts Center, T1, 2525 Michigan, Santa Monica CA 90404.