The Dreamer Examines His Pillow (review) 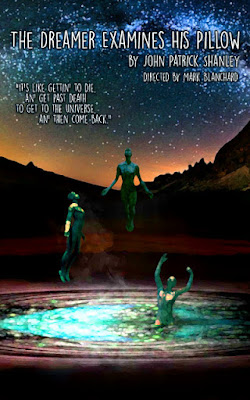 NOTE: This play has been extended and moved to a different venue--starting Oct. 6 thru Oct. 29, The Dreamer Examines His Pillow will show Fridays & Saturdays at 8pm, Sundays at 7pm at the Hudson Mainstage, 6539 Santa Monica Blvd.

Three people.  A man.  His sometimes girlfriend.  That sometimes girlfriend's father, an artist.  Circumstances give all three an chance to genuinely examine their lives, to reach some kind of epiphany about what they are going to do about themselves and each other.

Ultimately it all depends on execution.  The Dream Examines His Pillow is an early play by John Patrick Shanley.  I saw one of the original productions of it back in the 1980s in New York City.  After all this time, much of it sticks with me.

This production, in Hollywood for one more weekend as I write this, succeeds on far more levels than the New York one.  Thirty years ago I enjoyed the play.  This time I felt transformed.  Walking into the theatre feeling depressed, within ten minutes I felt totally absorbed in these characters and their words, losing myself in contemplating their paradoxes, their revelations.

What more is theatre supposed to do, honestly?

Tommy (Ade M'Cormack) and Donna (Scottie Thompson) broke up some time ago, not least because of how they hurt each other.  Yet they give each other ecstasy as well.  They touch each other in so many ways, in so many places, they find each other addictive and terrifying at the same time.  One particularly powerful encounter in Tommy's rat's nest of an apartment leads Donna to go see her estranged Dad (Sal Landi).  She's trying to make sense of her life, of what she now fears is a shape determined by her parents.  Is she reliving her mother's terrible marriage, an echo of someone else rather than herself?  Her father turns out to have some startling revelations of his own, ones that shock her to the core.  More, they stir up the seas of his own deepest soul.

This should come out ridiculous.  Honestly, in New York, parts of it did.  At least two of the actors then fell into some traps.  They didn't know exactly what they were saying.  Bad mistake.  They whined instead of talked or demanded or revealed.  Worse mistake.

Not this cast!  No!  They understood and meant every single nuance of every syllable.  Which honestly is almost the only way to care at all about what is going on.  Because the subject and plot of the play focuses on what is genuinely a religious experience--or at least what we call that because we don't have another word for it.  Each individual has a revelation, or a series of revelations, from a variety of different sources although ultimately themselves and each other.  And that kind of revelation, what we learn from it--there are no words.  We have to make some up, or arrange the words we know in some way that almost recreates some vague sense of what we've learned.

Director Mark Blanchard clearly understood all this, working hard with the cast to nail down what is actually going on here.  Not just a young man trying to figure out why he does terrible things, or a young woman finding out the bone-jarring truth about the relationship between her parents.  Yeah, those are there but remain symptoms or at best examples.

Why are we here?

What are we going to with our lives?

How are we going to treat each other?

What have we got to learn?

How are we going to find out what we have got to learn?

Fundamental questions, and this play tackles them head-on, then the cast tackles them again.  In turn therefore we the audience follow suit.  Yeah, what else is theatre FOR??????

The Dreamer Examines His Pillow plays Friday and Saturday at 8pm and Sunday at 3pm until September 24, 2017 at the Lounge Theatre, 6201 Santa Monica Blvd (one block east of Vine), Los Angeles CA 90038.