Macbeth at the Lummis House (review) 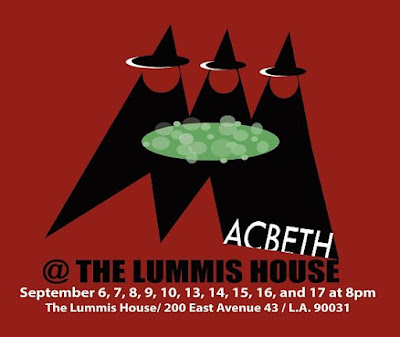 Macbeth at the Lummis House marks one of several events all year long sponsored by the Shakespeare Center of Los Angeles, celebrating/exploring the play which seems to be especially "on target" this year.  Yes, this is about the election one way or another.  This and Julius Caesar are seeing a lot of new (sometimes controversial) productions right now.

This slightly gets into this show's biggest challenge--namely of comparison.  Within the last twelve months I've seen several Macbeths, including two of the very best I have ever seen at all.   Which is unfair to this production.

Lummis House, not unimportantly, is a virtual castle built in Glendale by the same man who pretty much created the Southwest Museum nearby.  It looks amazing and frankly should become a regular site of Shakespeare performances in the future.  I hope it does!

This specific production is on the lean side of a what is after all fairly short play, so there's no intermission.  All the better!  You feel sucked into the world and events without a break!

Probably the single biggest strength of this production is how totally and seemingly effortlessly the cast understands every single word they say, conveying that meaning.  Anyone who has suffered through performances by performers who didn't know that, but just spake forsoothly in a vaguely Elizabethanesque mood will probably sympathize.  None of that here!  From the first line to the second, the cast understood and so we the audience understood.

In general the text's editing accomplished everything it set out to do, which is also a good thing!  Very good!  Rarely have I felt so the horror of Lady Macduff (Ashlee Dutson) as she realized her doom had arrived.  Even the Witches (Dutson with Camille van Putten and Lynn Favin) clearly had a relationship with the rest of the world, not just each other.  We even got a hint of what they are when "apart," i.e. medieval women in a brutal society.

The couple at the heart of the story were done in a fairly traditional sense, with the Thane of Glamis as a man of mixed feelings unequal to temptation, his Lady a dangerous and ruthless woman pushing him to an evil greatness.

Macduff (Fabian Cook Jr.) proved one of the very strongest performers, so much he carried off a lovely interaction at the very end with the Witches, without uttering a word.

This Macbeth I understand will be part of the Macbeth Haunted House at the Shakespeare Center for October, which seems to me an excellent choice given how vividly clear and precise the heart of this production is and presumably will remain.