As you can probably tell, to some extent this blog is about ideas that bubble up in my mind. My last post was about Celluloid Anticipations, i.e. movies I'm looking forward to and which are in fact on their way. This is about movies I wish were being made...

First up, The Green Arrow. One of the most established of all DC superheroes. Initially, he was little more than an archery version of Batman. The millionaire with a hidden identity, a cave, a special car, a side kick, etc. It got to the point where Batman himself pointed it out! But when you look at how the character has evolved, what one finds is a vivid and interesting person in his own right. For one thing, this is a guy without any trauma he's trying to live down. His parents weren't murdered in front of him. Rather, he discovered almost by accident that fighting crime gave him purpose. That reflects as well in his overt, and definitely left-of-center politics. Green Arrow (or Oliver Queen) also has an interesting past behind him, as a world traveler who has loved many women (a lot of them dangerous, like the Yakuza archer/assassin Shado). His most famous and intense love affair is with another superhero, Black Canary -- a beautiful young woman at least ten years his junior who's a mistress of martial arts. Consider -- here is a guy who successfully becomes a scourge of the underworld without dressing up like a vampire and spooking everyone. Crooks are terrified of him first and foremost because of his skill. He really is Robin Hood, but aimed at professional criminals while more-than-willing to take on corruption more-or-less directly. Thus he is really more Zorro than Batman, more V for Vendetta in some ways than The Dark Knight. Actually, he'd also make a great t.v. series.

Carmilla by Sheridan LeFanu has actually been filmed several times. The most famous versions are Hammer's The Vampire Lovers, Vadim's Blood and Roses and probably the Nightmare Classics version with Meg Tilly. The name "Carmilla" ends up used far more often, from video games to really schlocky horror movies. But I'd like to see an adaptation faithful to the novella, set in mid-1800s Styria capturing the atmosphere and characters of the original. What I don't want to see is the narrator getting a conveniently young and male love interest, of the loss of ambiguity surrounding the title character herself. Unlike the vast majority of vampire tales these days, Carmilla hints at all kinds of mythic images and ideas, often with little or no explanation. Who are her "companions" for example? And does the fact that Laura, the narrator, seems to be related to her have anything to do with events? Hardly any version includes the wonderfully weird detail of Laura having dreamt of her future predator/friend/lover when she was a child. Myself, I long to see a film with the kind of "feel" that combines Picnic at Hanging Rock with Henry and June with maybe just a dash or two of Lets Scare Jessica To Death. 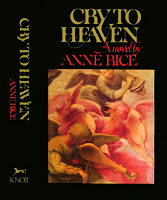 Cry to Heaven is my favorite novel by Anne Rice. And it has nothing whatsoever to do with vampires, at least nothing overt. 'Tis a tale set amid the castrati, the male sopranos created surgically when women were forbidden the opera stage. Like the gladiators of ancient Rome and rock stars of today, the famous and successful castrati became objects of near-worship and intense desire by both sexes. Within this world a story of revenge, of love and personal discovery weaves it way. Frankly, that probably is part of what makes it such a difficult book to get made into a film. Not simply the gay (and straight) sex, of which there is copious amounts. There's also the edginess, such as Tonio's (the main character) affair with a Cardinal, and the hints at semi-incest at one point. Technically, recreating a castrato's voice is no easy thing, as well. Yet this could be a fantastical film, equal parts lush and funny and heart-touching as well as dramatic as any could desire. And really, if somebody made Perfume: The Story of a Murderer into a movie, why not Cry To Heaven?
Posted by Zahir Blue at 7:58 AM

You are beginning to scare me with how many of the things you like, I like. I mean, Green Arrow (I have piles and piles of GA comics), Kerr Avon and Cry to Heaven? Spooky.