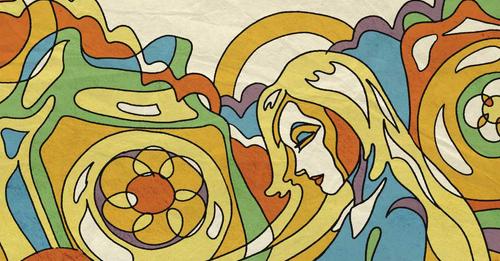 Spoilers ahoy!
One Bad Day is the latest total immersive theatre piece (by phone) by my friend Stepy Kamei (who played the title character in my adaptation of Carmilla: The Radio Play).  Her previous, about the great poet Sylvia Plath, was among my top ten of 2022.
This one contains another interesting premise behind it, but also a phone call with someone near the end of their life.  Someone who is now famous, sadly, for her death more than anything else.  More, it came at a startling time in American history.  Astronauts had landed on the Moon mere weeks earlier.  In the wake of what happened, the war in Vietnam became many times worse, followed by the Watergate Scandal which rocked American trust in our government to the foundations.
This person was Sharon Tate.
An actress of some talent, she appeared a variety of films including The Fearless Vampire Slayers and Valley of the Dolls.  She married Roman Polanski and they were expecting a child together when members of a cult called "The Family" headed by Charles Manson broke into their Benedict Canyon home and killed everyone there (except for a caretaker who was in the guest house, and heard nothing).  It was a shocking, horrific crime followed by others.  The investigation and trial can be read about in the non fiction book Helter Skelter and at least two different films more or less based on it.
But this experience focuses on Tate, on this very optimistic and happy person, someone charming and kind and generous.  Kamei brings this person to life, not in a cloying sort of hallmark movie way, but simply as a person who was like that.  A breath of emotional fresh air amid cynicism.  She was someone I wanted to spend more time with, an anodyne against angst and despair.
But of course, I also knew what was going to happen to her.  And that was horrible.
I was actually alive when these events happened, but was a child.  For me, it was very much like a trip back in time.  And it felt like exactly that, to the point where I felt shaken at the end, and more than a bit disturbed--a fine a testimony to the power of a performance as one could ask for.
One Bad Day is part of Nothing in the Dark Productions, As of this writing there are still performances scheduled for Jan 25 through 27, January 31 through February 3, and February 7 through February 10, 2023.
Posted by Zahir Blue at 12:31 PM No comments: 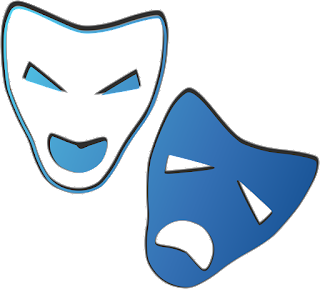 Always a difficult list to put together.  Always.  I struggled, as ever, no least because of my rule that no one theatre gets more than a single listing on this per year.  Plus I wanted to add at least two or three more plays.  Some of the criteria are quality of performance and production, but also my view of the scripts.
So here it is.  In no particular order...
Posted by Zahir Blue at 10:10 AM No comments:

The Many Lives of Abigail Season (review) 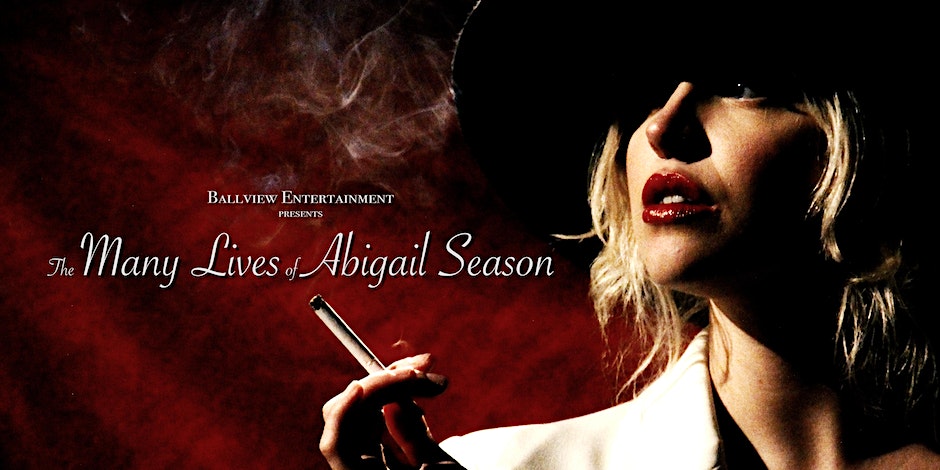 Having enjoyed previous shows by Ballview Entertainment so much, I naturally enough looked forward to The Many Lives of Abigail Season.  As per usual, what I did not do was try to find out much about the content.  Fewer expectations mean I can allow myself to more thoroughly enjoy what a performance is trying to be.

But this is a review, so you want to know that.  Here is my take:  A noir mystery about a missing person entwining the adult film industry and high level string theory in quantum physics.  Plus, you know, a pair of kid detectives.  Same old, same old.

I mentioned this description to some friends and their reaction was a "Hell yes, I want to see that!"

Which makes plenty of sense.  Words like zany, complex, mind-blowing, madcap, tragic all come to mind having seen this eighty-minute performance.  Meg Colburn directed this play by Max Zumstein, centered around Mark Darling (Ty Aldridge) whose wife Abigail (Jenna Hogan) vanished without a trace months back.  When he sees her in an adult movie--a scene not as graphic as it might sound, but somehow more disturbing--he ends up hiring kid detectives Mason (Lauren Adlhoch) and Stone (David Dickens) to try to find her.  I would argue this set-up alone veers into the wonderfully bizarre.  Pretty soon, in between scenes of the investigation we see Abigail in other lives--a nun, a business exec, a maybe secret agent.  Along the way we also meet a cascade of wild characters including an effete but honorless private detective (Sean Alan Mazur), a brilliant physicist turned porn star (Sika Lonner), another porn star who seems to have become some kind of aspiring Boddisatva (Ian Michaels) plus two sets of what appear to be a brother and sister (Liz Mina and author Zumstein) who form a pair of truly wild duos, and a publicist AND her secretary (Antonia Czinger).  Without an intermission, the plot and emotional roller coaster never really slows down very much.

What makes this work ultimately is that the people seem in some sense real, at least in terms of this weird world.  We recognize them, even if they are weird.  After all, haven't we all wished we could just be hired to have fun and become a star?  Or had our personal interests and obsessions prove true, important, and feasible?

The character of Mark Darling in particular seems vividly "us" in some way.  He's in many ways the most ordinary of characters.  Not least is the fact he's unhappy, alone, yearning for a love he no longer has in a world that makes no emotional sense to him.  At all.  He's the point of the spear when it comes to the whole quest of the plot--and in the end he does survive, does end up enough for most the challenges he faces.  If in the end he doesn't get all he longs for, we can hardly deny he's become stronger, even wiser. 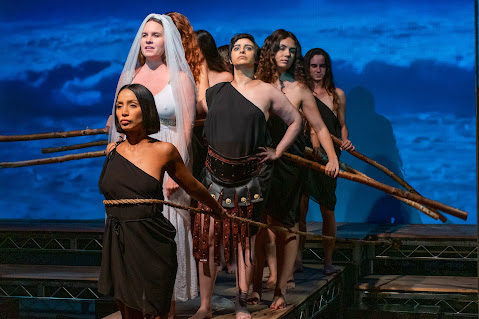 Just before the Pandemic hit, I attended a reading at CityGarage of a play by Margaret Atwood based upon her novel Penelopiad.  A friend of mine in the company was really jazzed, having already been cast in a scheduled full production!

Happily, time has passed and CityGarage survived, and now they have resumed their plans to produce this play, which tells the story of the Odyssey from the point of view of Penelope, wife of Odysseus.

We begin in Hades, the afterlife, when the shade of Penelope (Peggy Flood) ponders her life and its consequences,  She recalls her youth (Lindsay Plake) and how her father almost had her drowned due to an oracle.  However, Penelope's mother (Angela Beyer) was a sea nymph and the children of such do not easily drown.  She also gives her child some advice that will help and hurt her in the years to come, about being water which does not resist but envelopes, goes around, and in the end always wins.

Metaphors and similes being inexact, this proves of mixed value.  Penelope later ends up wedded to the clever Prince of far away Ithaca (Emily Asher Kellis) who--like every other royal in the Bronze Age--had vied for the hand of Penelope's beautiful, remorseless cousin Helen (Marie Paquim), and whose unfaithfulness would later spark a war.  The bulk of Penelope's story takes place in Ithaca, where initially she has little to do save bear a child, Telemachus (Courtney Brechemin).  In particular she has to deal with Eurycleia (Geraldine Fuentes), her husband's old Nurse who spoiled him, and then spoils his son, with the careless and relentless will of someone only a little clever but not at all wise.

The real challenges arise, however, as the Trojan War proceeds, then ends, but Odysseus does not return for ten long years.  Having done much to make Ithaca wealthy, Penelope finds herself the target of predatory suitors (Kat Johnston, Devin Davis-Lorton, Mary Egan) with only the help of a dozen special maids, slaves born on Ithaca and who had become dear to her (Loosema Hakverdian, Marissa Ruiz, Lea De Carmo).  From such comes the tragedy to unfold, for the Maids haunt Penelope in Hades. Eventually we learn why.

So much for plot.  What really makes up the beating heart of this production are the twin beats of ritual and theme.  In a true echo of Greece's ancient theatre, much here is made of dance and masks, with the Maids switching between individuals enduring assault and hatred and a final blinding cruelty, and also a true Greek Chorus bidding us consider the world from the viewpoint of the less fortunate, the abused, the so-called "walk ons" and "extras" in life.  This includes, of course, all women, to one extent or another.  While a feminist work, this play seems mostly to focus on the more pervasive sins of Vanity and especially Cruelty.  Indeed, Penelope at one point notes how she has watched the world in the millennia since she died.  It has only grown worse, in her eyes.  That is why she refuses to re-incarnate, to re-enter that cruelty, even though she remains tortured by her husband's charm which covers up his restlessness.  Worse, she remains haunted by the shrill voices/images of her "doves" the murdered Maids she failed to protect.

Yes, it was not her fault.  She tried.  But she did fail.  And more to the point, she should never have had to try.  But this world is full of casual cruelty.  Better to remain in Hades.  That was what Penelope learned.  Water does not conquer in the end.  Water simply remains.  It does not seem enough.

But also, the ritual which which the play appears before us demands some praise.  In fact nearly the entire cast plays multiple roles, and sometimes I barely realized some played certain roles until I read the program.  The way the cast members became ships, became waves, became ghosts, became slaughtered animals, etc. was part of how director Frederique Michel brought a frankly difficult play to life.  It proves a wonderful dive into the imagination, rather than some over-extravagant outpouring into live special effects on stage (I'm looking at you Phantom of the Opera as well as a dozen others).  When certain things happened on stage in this production, I flinched.  Other times I giggled, usually with at least one character.  This show despite its scale of wars and worlds, remained intimate not only in terms of the writing but our experience.