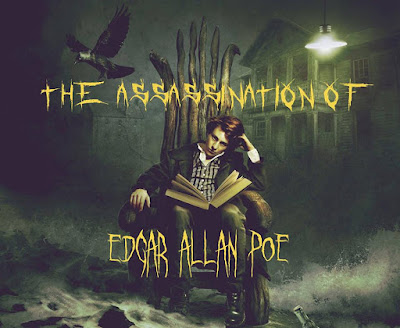 The Downtown Rep has the great good fortune to have Pico House across the street from Union Station as a venue.  The centuries-old building (still undergoing restoration) includes a gorgeous central courtyard of red brick--a seemingly perfect setting for a gothic work centered around this nation's most famous poet.

They also play up this for all it is worth, exploring not only that wonderful courtyard but different rooms and hallways.  Publicity calls it an "immersive" experience, which it certainly proves, and frankly more-than-usually successful.  Part of the story's conceit centers around Poe, immediately following death, finding himself two choices embodied by two individuals from his life: Henry Kelly as a mysterious figure urging him to atone and repent for his errors;  and Dan Lench as none other than Rufus Wilmot Griswold, the critic who loathed Poe and libeled him after death (portraying the poet as insane, seething with envy, a habitual drunk, etc.).  They seek to show Poe his life, to understand himself as well as his work.

Poe himself makes for a marvelously complex and weird individual, compelling and tragic yet strangely triumphant.  His mother  dying young, with a wealthy childless couple adopting Edgar (but not his siblings), his stepmother (Tiana Randall-Quant) dying young as well but an "odious" stepfather (Matt J.J. Miller) cutting him off in favor of his own illegitimate children.

We follow and observe highlights of a difficult life, helped hardly at all by Poe's pride and sharp tongue.  Yet without doubt he also proved a victim.  The play doesn't really deal with this detail, but Poe was even murdered by parties unknown, almost certainly kept drunk for days to make sure he voted over and over again in Baltimore's local elections.  Whoever they were, they left him in a gutter, in wet clothes in November.  Along the way, he fell desperately in love and married his underage cousin Virginia (Chanel Castaneda) over her mother's (Kathleen Cecchin) objections.  Yet by all account the marriage proved happy, until once again tuberculosis (called "consumption" at the time) slowly claimed her.

Poe himself is played by several four different actors, allowing him to not only stand there in his life, but watch and comment upon it--his fierce and strange relationships with Mrs. Ellet (Rachel Levy), Mrs. Osgood (Arielle Uppaluri), and Helen Whitman (Dylan Diehl) among many others (these were but three of the many women in his life--a fact to which Virginia later makes her own loving but melancholy coda).  Hence we have the dead or omniscient Poe (Devon Armstrong), my personal favorite Poe in his thirties (Garrick Lewinter), Poe a little younger (Alec Gaylord) and also in his teens (PJ Diaz).

Within this limbo plays out not only scenes from Poe's life, but also his poems and his stories.  Indeed, the very start of the play amounts to an adaptation of "The Cask of Amantillado" which increasingly seem cogent.

The end result feels a little bit like one of Poe's stories, but ending with perhaps less horror and more wisdom, and a trifle more narrative complexity.  The two hours of the show manages to leave us not with a lecture, but a dramatized portrait, a history in low key spectacle, leaving lessons or conclusions to be drawn by ourselves rather than imposed by the authors (Devon and John Armstrong).  It really does come across in some sense as "a dream within a dream."

The Assassination of Edgar Allan Poe plays Fridays, Saturdays and Sundays at 7:15pm until August 26, 2018 at Pico House 424 North Main Street (at Olivera), Los Angeles CA 90012 (across the street from Union Station).  Performances are free but contributions extremely welcome.
Posted by Zahir Blue at 9:24 AM No comments: 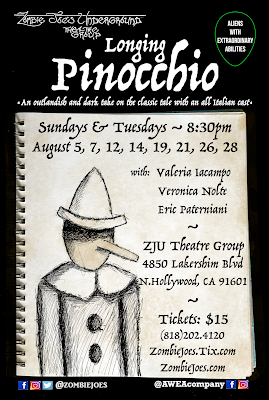 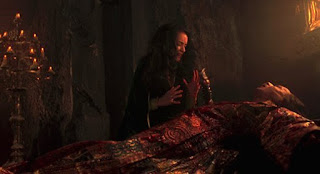