Attack of the Rotting Corpses (review) 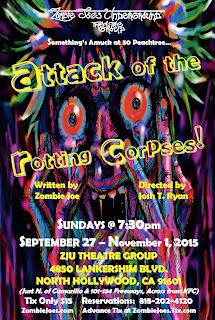 Zombie Joe's has several shows it tends to do every few years (as well as its signature program Urban Death). One of these, Attack of the Rotting Corpses, has been re-mounted for 2015. Given the title, one might expect zombies. Well, you would not be disappointed!

A Los Angeles condo falls victim to a mutated virus somehow ending up in the water supply. The virus eats away at its victim, driving them mad with a desire for human flesh to devour. A variety of archetypes that make their home there succumb, making the whole thing among other things a satire about modern society in general. Fairly standard George Romero fare, as far as that goes, but not in any copycat manner. Rather playwright Zombie Joe added his own blend of weird sexual antics and dark humor to the mix--augmented by director Josh T. Ryan. The previous production reminded me (via some roundabout psychological roller-go-round) of The Rocky Horror Picture Show.  This one reminds me more of some hybrid child of Dawn of the Dead with maybe Texas Chainsaw Massacre. Kinda/sorta. And not just because of the increased gore, or even the homo-erotic subtext simmering between the two condo consierges (usually a man and a woman, this time two men).

What really turns this from some kind of goofball set of horror skits into a play is the manner in which everyone involves takes it seriously--yes, including the humor. Especially the humor in fact. As Edmund Gwenn (Kris Kringle in A Miracle on 34th Street) is reputed to have said with his last breath, dying is hard but not as hard as comedy. Timing and attitude have to very nearly perfect, and much of this show demands alot of the performers. Vanessa Cate, for example, plays a voracious sexual beast who manages to remain sexy in her almost-there costume even as decompositon sets it. More importantly, she comes across as a character, not a caricature. Likewise Michelle Snyder very nearly steal the show, and certainly every scene in which she appears as a faded star (or starlet) who frankly seems the least wretched of all the zombies in the end because so many of her parts are probably not original.

Michael Blomgren returns to the stage in three roles, including a random victim of a married couple of starving zombies as well as a dog. Other cast members include Tyler Coster and Wynn Harris as well as Lauren Velasco, plus Josh T. Ryan himself.

It all melds into a weirdly grosteque and hilarious hour of theatre!