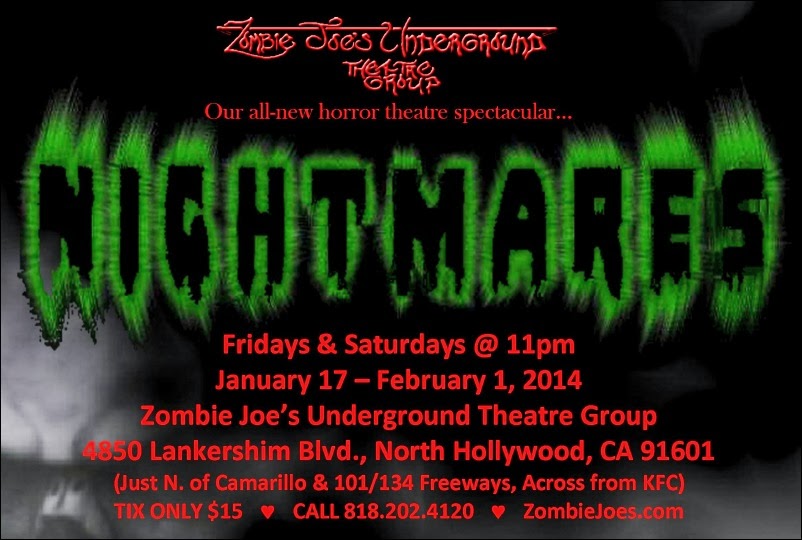 Actually, I'm not sure if spoilers are really possible with show, but just in case...

Nightmares makes for the latest offering by Zombie Joe's Underground Theatre in North Hollywood. Directed by Zombie Joe himself, it includes several cast members who've been in one or more (sometimes several) of the company's shows before. Roger Weiss and Corey Zicari head that list, both of whom appeared in Urban Death, ZJU's signature piece that was recently restaged in South Africa!

This show (it cannot really be called a play) falls into the same 'vein' as Urban Death. Like many offerings at ZJU (but hardly all) it can be described as theatre-of-dreams. At least that is what I call it, because ultimately most folks technically don't happen to know the exact meanings of words like "surreal" or "expressionist" or the like. Besides, works like Whore's Bath or The Raven don't necessarily fit into those definitions. But they retain the eerie irrational logic of dreams, where identity as well as location, cause, effect and history remain fluid. 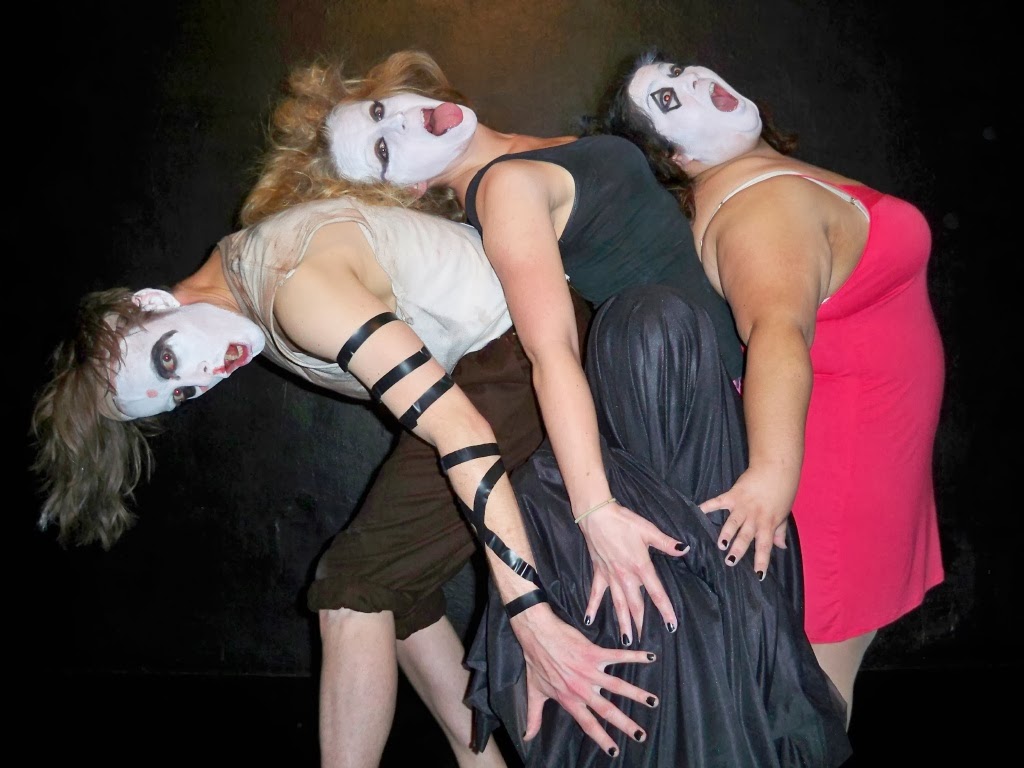 What we get doesn't make up so much of a narrative as a shaped experience. In this case, the stuff that makes up its heart shows up in the title--Nightmares. Indeed at least one sequence reproduces a classic of the type, one immortalized in many a movie or t.v. episode. But the rest go a more generalized direction, emphasizing themes of fear, of terror, of horror.

To be devoured. To lose one's identity, and perhaps welcome it on some strange level--only to have that new gestalt ripped into pieces. To live in a world that remains at heart a dark cave full of grunts and incoherent whispers. To have one's desires fulfilled so much as to become awful--easy attractiveness transformed into gang rape, for example. To inspire lust, which then degenerates (or ascends) into cannibalistic hunger. To be stupid, shallow, and singled out as the most foolish of all.

Horrors. The kind we all really do live with, for much of our lives. Maybe the stuff with which we struggle during youth, as we shape ourselves into the individual seeds of our current identities. Primal. Foundational, even (not quite the same thing). 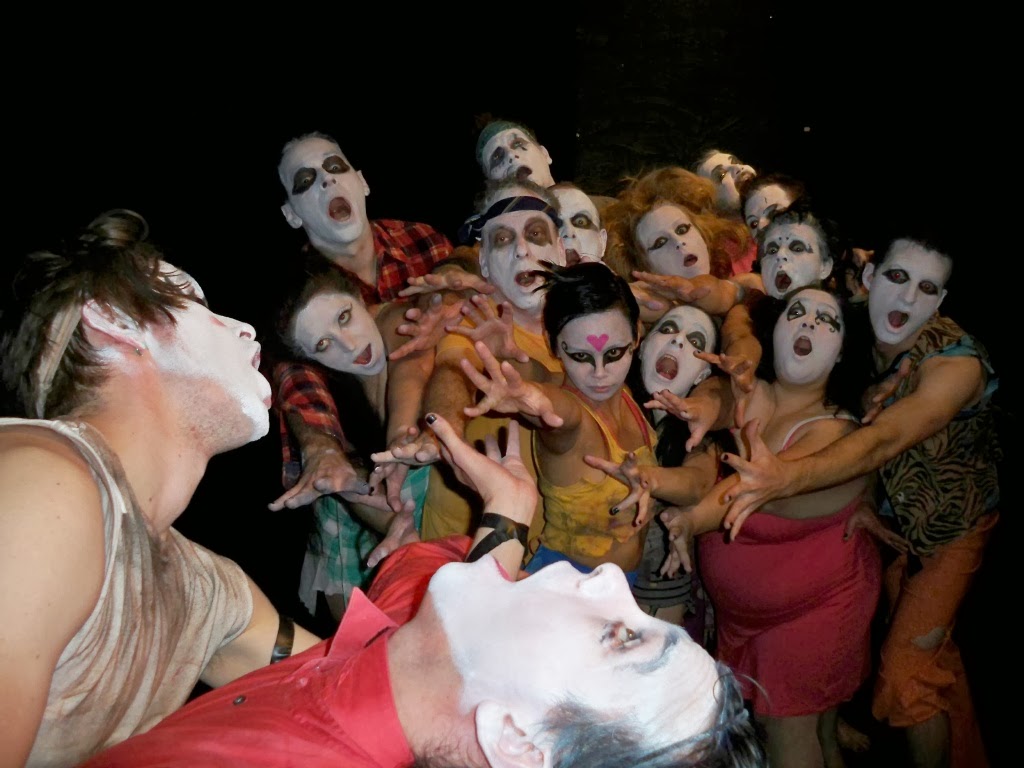 All this blends into what might best deserve the classification of "Dance." But maybe "performance art" is better--at least in letting the potential audience know what kind of show they should expect. In Nightmares one object pretty clearly was to shred the fourth wall. So they've taken away the seats. Attendees may stand or sit on the risers, or against the wall, inside the performance area. (In other words--wear comfortable shoes.) Before curtain time, members of the cast wander about offering individual snacks to theatre-goers. Their white-painted faces serve as masks. The live original music produced/performed by Keven Van Cott (and Ellen Burr) also eases us into the weirdness to follow...

Trying to break down all the follows runs counter to the idea behind the show. More importantly, it might well reduce the quality of the experience. Certainly one can point out the actual dance sequence choreographed by Donna Ibale (another veteran of many a ZJU show) as well as mention others like Leif La Duke (in the award-winning Hamlet), Abel Horwitz and Jason Britt and many others like Gloria Galvan and Rebecca Santini. But at heart what needs saying is what the show is like, as well as what it manages to achieve.

Any description is best handled by the text above.

What does it achieve? A comparison might do well. Last Halloween, Zombie Joe's hosted what soon became a very successful haunted house based on their signature piece Urban Death. That aimed--and succeeded--at generating chills up the spine, fear on the level of crawling flesh and raised hair. Nightmares aims at something rather more subtle, at a journey into what terrors lurk in the corners of our minds. Not to simply scare, but to disturb and perhaps educate--not by giving a lecture, but a visceral experience.

For the record, I think it succeeds.

Nightmares plays Fridays and Saturdays at 11pm, January 17 through February 1, 2014 at Zombie Joe's Underground Theatre Troupe 4850 Lankershim Blvd (across the street from KFC, just south of the NoHo Sign) North Hollywood CA 91601. Tickets are $15 each. Call (818) 202-4120 for reservations or check out ZombieJoes.com.

Disclaimer: In the interest of honesty, I should admit that apart from a friendship with Zombie Joe and many of those associated with his theatre, I now have a professional relationship. My play Carmilla (based on the vampire classic by Joseph Sheridan LeFanu) will premier at ZJU February 21.
Posted by Zahir Blue at 12:33 PM No comments: