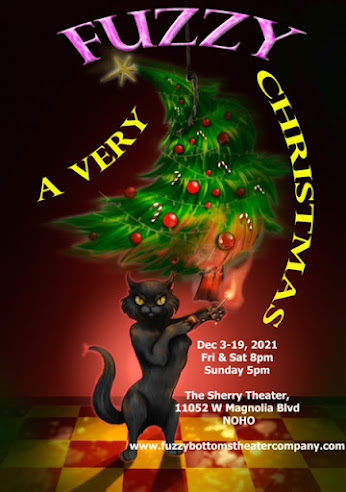 What comes to mind when you hear or read the word "zany?"

My own reaction includes such diverse things as funny, bizarre, startling, messy, sometimes incoherent, usually entertaining,  but never, ever boring.  That could pretty much be my review of A Very Fuzzy Christmas.

Essentially the show re-tells A Christmas Carol in a...well...zany re-imagination in the wake the Pandemic, with four 80s Rock Star Gods intervene to help some folks emerging from quarantine with their lives.  Do things go as planned?  No!  A thousand times no!

That is one reason the whole thing is so much fun!  Given the premise is so absurd, no one should feel surprised just how wildly dysfunctional every single character in this show proves to be.  Miserly greed or crippling poverty take a back seat to such disappointments as figuring out your best friend has been drugging you so as to kidnap, torture, and f*** your dates.  Or having to face down an army of rapid, fierce attack bunnies!  Maybe the less said about the deliverywoman turned into a Christmas Tree of the most cheerful psychotic ever, the better.  Except actually I insist on saying that is arguably the most creative, and weirdly compelling part of the show!  Only the final musical, with Footloose somehow emerging into the present time, exceeds same.

Just a listing of the cast and their roles give a real hint of what kind of Christmas show this is--complete with a splash zone in the first two or three rows (I sat in the fourth and so avoided any stage blood to clean out of my clothes--although the theatre does provide plastic covering for those in the zone).  This is only a partial list because all play multiple roles (nearly all are ninjas at one point, for example).

April Littlejohn (who also wrote and directed) plays the perfectly named Cherry, object of a nerd's high school affection for years, re-kindled at a high school reunion and thus warping time and space, turning said nerd's life into a movie.

Stephanie Mayer is Lita Ford, first of the 80s  Rock Gods summoned into their future, and she is not happy about it.  Not one bit.

Amanda Vidal plays Ariel, the female lead of Footloose somehow re-incarnated into a piece of software.

Jason Galindo plays Carl, who lives (if you can call it that) with the afore-mentioned woman-turned-into-a-tree.  He is kinda/sorta a dog now.

Nathon Bock portrays the nerd sucked into a semi-remake of Footloose.

Vincent is said mad scientist, who has maybe one marble left, but his life is at least overflowing with bananas.  For now.

Michelle Danyn plays a doll brought to life somehow with the spirit of a cat, intended to be the mad scientist's new (and first) girlfriend.  That does not go well.

Trevor Hooper rounds out the cast as a drug dealer who employs both ninjas and said rabid killer bunnies.  Because of course he does.

I stared and listened, shocked and amused, laughing then grimacing, and ended up almost giving this amazing show a standing ovation! For everyone?  No.  But read my description of the cast and see if you're intrigued.  If yes, then this might well be the show for you.  It was for me.

A Very Fuzzy Christmas plays Fridays and Saturdays at 8pm, then 5pm on Sundays until my birthday, December 19, 2021 at the Sherry Theatre, 11052 Magnolia Blvd, North Hollywood (a few blocks east of Lankershim). 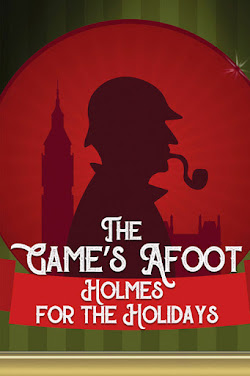 The central character of Ken Ludwig's play The Game's Afoot (Holmes for the Holidays) was in fact a real person.  No, not Sherlock Holmes--but for many, the next best thing.  Before Benedict Cumberbatch, before Jeremy Brett or Basil Rathbone was William Gillette (Neil Thompson), who wrote and starred in the very first full length stage adaptation of Arthur Conan Doyle's famous sleuth, and did so decade after decade.  The part make him a star.  It also allowed him to build a castle for himself in Connecticut, complete with gadgets and secret panels.

Even as he is the central character of the play, so that castle is the play's setting.

The story proper, however, is pure fiction.

Not that it matters!  Following a mysterious shooting, Gillette invites a group of friends to his famous castle for Christmas, 1936.  Felix Geisel (Patrick Skelton) and his wife Madge (Barbara Brownwell) plus Simon Bright (Troy Whitaker) and Aggie Wheeler (Sasha Vanderslik), all castmates of Gillette in his Holmes play, join his mother (Clara Rodriquez) as well as the most unwanted guest, a theatre critic and gossip columnist name Daria Chase (Susan Priver).

What follows begins as a series of games, amid revelations of various secrets, and culminates in an actual murder.  Enter the genuine Inspector Coring (Michelle Shultz), a local police officer with a quite baffling English accent who has to contend with Gillette's charismatic insistence that he himself is a sleuth--at one point even donning a deerstalker!  As this last detail suggests, along with the title, the story is played for laughs.

The result proves very charming indeed, with a host of flamboyant characters traipsing around stage amid hijinks and complications, leading to a series of fun surprises that entertain but do not shock.  Kudos here to Rodriquez and Priver who come very near to stealing the show.   When they are alone together on stage is in many ways the high point.  But then, that is how the play was written.

Larry Eisenberg's direction, the fun and nicely cluttered set design by Chris Winfield, and the often gorgeous costumes by Angela M. Eads all deserve their own nods and applause.

The Game's Afoot plays Friday and Saturdays at 8pm with Sunday matinees at 2pm until January 2, 2022 at the Lonny Chapman Main Stage 10900 Burbank Blvd. NoHo 91601.

Posted by Zahir Blue at 6:16 AM No comments: