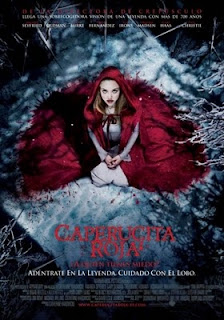 With my taste for myth and nightmare, mingled with sexuality, little wonder I eagerly awaited the film Red Riding Hood.  Several members of the cast inspired hope, from Amanda Seyfried to Gary Oldman and Julie Christie.  Now I've seen the finished film, what is my reaction?

The good in this film is very good.  Apart from the gorgeous imagery, and a genuinely compelling musical score, some performances reach the level of wonderful.  More, the plot--essentially a supernatural mystery--is quite fun.  On the other hand, the writer of this dialogue should be forced to copy by hand the works of Caryl Churchill, Stephen King, John Ajvide Lindqvist, Ray Bradbury--anyone who knows how to write dialogue.  Maybe it would rub off.  We can hope!

Another problem.  Given my love of history, I'm not very forgiving of wild historical inaccuracy.  Like the fact all these medieval peasants used hair conditioner.  The multi-cultural knights come to hunt the werewolf (and any witches that might be around) would be okay--were they explained.  When the local priest (Lucas Haas, in an underused role frankly) says he's sent for Father Soloman (a famed witch hunter) and that he'd be there tomorrow, all I could think was "How do you know that?  What, did he send you a text?"  Mind you, all that would be a lot more forgivable were the whole thing more stylized.  As the film appears now, it seems either too off-kilter for naturalism, yet too naturalistic to be a mythical world of werewolves and walking archetypes from the unconscious.

By far the biggest problem, though, remains a not-uncommon one.  Simply, the two male leads who vie for the the heart of our female heroine, are boring.  Unforgivable.  An old acting coach of mine once said "When  you become an actor, you sign a pact saying you're not allowed to be ordinary or dull any more."  Several members of the cast demonstrate this truth with great skill.  But instead of genuinely interesting, compelling characters in those roles we see a pair of male models--who suspiciously resemble Edward Cullen and Damon Salvatore.  Minus the charisma.  That one is supposed to be a blacksmith and the other a wood cutter yet both have slender frames makes for one more detail that yanks me out of the film and back into my seat in the theater.

Too bad.  Most (albeit not all) of the potential of this film bled away.  You can still enjoy it, especially in the right mood, but there are way too many drops of mediocre amidst the fine wine and juicy meat.  Make that a drinking horn or two, rather than drops.
Posted by Zahir Blue at 2:11 PM 1 comment:

My version of LMI 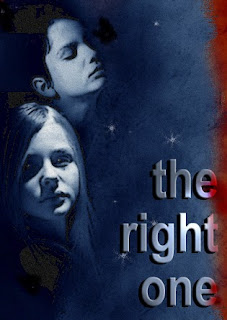 Elsewhere online, plenty of debate swirls around two film versions of the same novel--Let The Right One In by John Ajvide Lindqvist.  Me, I loved the book and both films.  But then my mind went to the Japanese novel Ringu, which became a series of successful Japanese films.  And then a Korean film.  Plus an American movie, The Ring.  Last I heard a Hindu version was in the works...

So what if a third version of Lindqvist's book were filmed?  Here's how I'd do it.  Be warned--if you haven't read the book or seen at least one of the movies the following probably won't make a lot of sense.

The Right One (based on the same Jim Morrisey lyric as the novel and first film) would be set in a fictional West Island suburb of Montreal called Noirville.

To distinguish things, I'm naming my two central characters Orrin and Elle.  No, I've never been to Montreal but have read quite a bit about it for a variety of reasons. The West Island is a more 'rural' area and is somewhat heavily Roman Catholic. With that in mind I'd say Orrin goes to a Catholic school run by nuns. More, I'd have him the child of a mixed Anglo-French/Protestant-Catholic marriage that has failed and the bullies would target him in some sense along those lines. Why? Because it seems to me a major theme in the story is they way we refuse to find emotional connections with each other yet also how we do find them. Ethnic and religious conflict seem a good way to illustrate that without having to go overboard. Not that such would form a major plot point, but it would be part of the background and context.

My version would include the police detective character from the book, someone who more-or-less accidentally interacts with all the major characters at one time or another. Said encounters would make up something like a Greek Chorus to the story--not overtly but as a bit of punctuation. He'd be talking to Orrin's class at the start of the tale.  Later he'd meet the couple who'd later be destroyed by Elle, gently warn them about driving while drinking.  As killings by the so-called West Island Ripper became known, he'd appear on television, etc.

Elle's helper, whom I'd call Harmon, is a bit different from either Hakkan or Thomas. I'd like to hint he is a priest, perhaps a pedophile but also a man who has lost his faith then found it again in the service of this genuine supernatural creature. More, I'd like to show Elle as exhausted by his attentions and expectations--he doesn't see her after all but a kind of symbol.

Would I deal with Elle's gender? Depends. Given my druthers, yes. And I'd also like to include Zombie Harmon. My concern would be time, but if this weren't a motion picture it might work. Let us assume it a four hour cable miniseries and then we can go with that. But the whole Zombie thing would need to be streamlined a fair amount--its major dramatic purpose to indicate just how troubled and alone Elle's existence has been.

Actually, a fair amount of the story would be told from Elle's viewpoint. Would love to see a camera shot of her 'landing' at the Hospital window, especially from her POV. And that is also how I'd do the pool massacre--with Elle watching her dear friend Orrin then reacting with such incredible violence at seeing what was happening. Rather than stay with Orrin, I'd have the camera see with Elle's eyes as she destroyed each of the bullies--their terrified faces, the blood spattering everywhere, her leaving one of them alive because of youth and innocence, then plunging into the water to retrieve Orrin who has lost consciousness.

Cut to the aftermath, to the puzzling forensic evidence, the detective trying to figure out what to tell the missing boy's mother...

And somewhere, maybe in a hidden corner of an abandoned windmill where we saw Elle go after leaving the apartment building, we see the steamer trunk. Within it, Elle holds the soaking wet, seemingly dead body of Orrin in her arms. She wakes as the sun sets. Then, do does Orrin, his eyes catlike for a moment. He sees Elle--and smiles.


Just wanted to get that off my chest.
Posted by Zahir Blue at 2:10 PM 1 comment:

Email ThisBlogThis!Share to TwitterShare to FacebookShare to Pinterest
Labels: adaptations, child vampires, creative writing, john ajvide linqvist, let me in, let the right one in
Newer Posts Older Posts Home
Subscribe to: Posts (Atom)
Chosen as one of the Top 30 Theatre Blogs