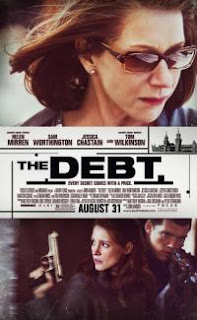 Spoilers Ahoy!
Was fortunate enough to see an advance screening of The Debt, a 2011 film starring Helen Mirren and Jessica Chastain.  The former of course has become a legendary actor, while Jessica Chastain shows every sign of becoming her equal.  She makes an excellent choice to play Rachel Singer in her twenties, as Mirren portrays the same character three decades later.  Rachel is one of a three-member Mossad team sent to East Berlin in 1967 to kidnap a war criminal known as "The Surgeon of Birkenau."

(Parenthetically, this character would appear to be based somewhat on the infamous Dr. Jozef Mengele, while the operation itself echoes the successful capture-for-trial of Adolf Eichmann)

With Rachel are David (Seth Worthington and Ciaran Hinds) and Stephan (Marton Csokas and Tom Wilkinson).  One she will grow to love.  The other she will marry and by whom have a child.  Eventually.  Which makes a good opportunity to mention that, despite what some might claim, The Debt is not primarily a thriller.  Not at all.  It has plenty of thrilling elements, but first and foremost the story makes a drama--the drama of three individuals pushed to their limits by extraordinary circumstances.

The film periodically switches back and forth between 1967 and 1997, the latter when Rachel's daughter's book about the famous operation sees publication.  Coinciding to this is are a series of events that threaten to reveal a secret all three former agents swore to never reveal, never even speak of again.  Like many such vows, it ends up un-keepable. 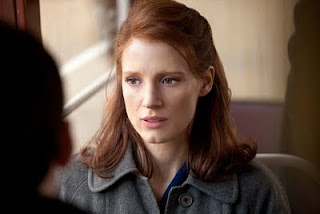 As far as the world knows, the three found the notorious Dr. Dieter Vogel (Jesper Christensen, probably best known as Mr. White from Quantum of Solace) hiding under a false name in East Berlin.  This detail I'll admit gave me pause.  Of all the places to hide, behind the Iron Curtain seems one of the last places a Nazi war criminal might go.  Not that it couldn't be explained, but I wondered.  Maybe that was best.  It felt like the kind of inconsistent detail with which real life abounds.  At this time Rachel endures what has to be the most harrowing scenes in the entire film.  Imagine submitting to a gynecological exam from someone who used children as lab rats!  Stripping.  Putting your legs into stirrups.  Allowing that man to touch you in such an intimate place.  He behaves politely, professionally, even kindly.  But by then we the audience know, and not merely because we saw pictures of his victims.  We know because of the look in Jessica Chastain's eyes, the tension that reads like revulsion in every cell of her body.

Sadly, the rest of the movie never equals those scenes.  Maybe it couldn't.

What the three share is this.  According to official accounts, their method of extracting their subject was compromised, forcing the three to stay hidden in a dingy apartment for weeks, keeping watch over their prisoner who never lost an opportunity to needle them (this seemed just a touch cliche--the evil master manipulator a la Hannibal Lecter).  During Rachel's watch, he managed to get free, in the process wounding her very badly, leaving a permanent scar on her face.  Before he could get away, she managed to shoot and kill him.  They disposed of his body and snuck out, eventually returning to a hero's welcome in Isreal. 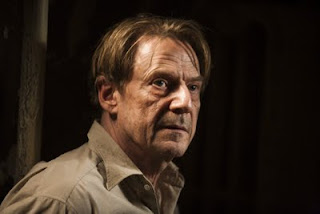 The truth?  She never got off a shot.  He got away.  Terrified what it meant for them, and maybe also for the prestige of Isreal itself, Stephan persuades the others to go along with the lie, figuring Vogel with disappear and spend the rest of his life looking over his shoulder.  Stephan throughout has been the most ruthless of the three, willing to abuse Vogel, then seemingly helpless.  David had been the most idealistic, the lone survivor of his family, but for that reason (perhaps) the most vulnerable.  Thus Vogel succeeded in getting David to explode in anger, beating their prisoner and breaking a bowl--a shard of which led to the escape.  Blaming himself, shocked at his own lack of control, he went along.  Rachel, the youngest and least experienced of them, ultimately did the same.

What of the most striking things about the film is how one can compare the younger and older versions of these characters.  All look haunted, worn, tired.  Mirren's Rachel seems now the strongest, able to handle things and seeing with an increasingly-clear vision the whole situation.  Wilkinson's Stephan looks like a man grimly following his life's path, aware too late he did the wrong thing but having learned little more than that.  Hinds' David, though, looks like a ravaged soul, one on the edge of self-destruction. 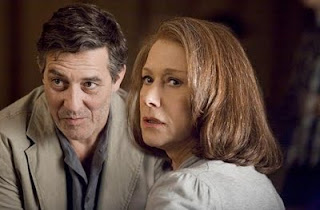 The modern tension of the story deals with David's suicide, evidently linked to a news item about an elderly patient in the Ukraine claiming to be the Surgeon of Birkenau.  Here, while done with sublime competence, the drama falls just a little flat.  Why?  Because we don't feel any surprise.  By the time Rachel sneaks into the hospital to see this man who says he is Vogel, I knew there were only two options and which was the many times more likely, more formulaic.  That was the one played out.  No, this wasn't Vogel.  That she very nearly killed him before learning this shocks Rachel into writing a confession and leaving it for a journalist she knows is en route.  Following that was the next bit of formula (again, executed very well) in which it turns out Vogel is indeed in that hospital.  The very elderly man seeks to kill her, but she fights back and this time accomplishes what she failed all those years ago--killing the butcher of children many decades after his crimes.

Now consider for a moment all the other possibilities here.  What if the old patient had been Vogel, then she killed him and couldn't live with herself?  Or if she didn't kill him, but saw him as pathetic beyond belief, yearning for a bit of fame, and she manages to convince the reporter he's an insane old man?  Then, for her own purposes, comes clean and tells the truth?  Or what if Vogel revealed himself because he's in terrible pain, longing for death, and figured this way he'd get those who wanted him dead to do him a favor?  What if she did it, out of pity?  All those would be far more interesting, compelling that this plot.

No complaints about the utterly stellar cast.  Really.  Splendid the lot!  But director John Madden as well as writers Matthew Vaugn (who pulled a crucial dramatic punch in Kick Ass as well) and Jane Goldman (ditto) all need to learn to take some chances.
Posted by Zahir Blue at 9:24 AM 1 comment: