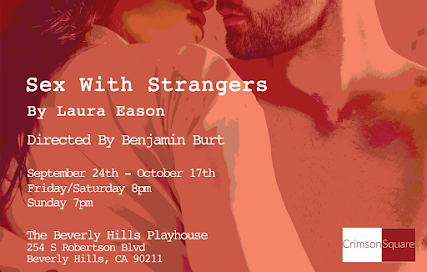 This marks the second production of Sex With Strangers by Laura Eason I have reviewed.

The plot, very character-centric, is about two writers--Oliva (Cameron Myer) and Ethan (Casey King) who meet in the middle of a blizzard at a writers' retreat.  No one else showed up, because of said blizzard.  Sparks fly (or are supposed to) between these two.  One is a huge fan of the other as a serious novelist, the other self-conscious enough to fear criticism and mostly out of touch with the modern trends.  What the play follows is a relationship that develops, in which Ethan helps Olivia out of her shell while waving periodic red flags about misogyny and frankly a disrespect for rules or boundaries (which after all is not the same thing).  Honestly, Olivia blooms in many ways under the prodding and avid attention/admiration of Ethan.  Yet those red flags remain, not least his vlog (from which we get the title) which turned into a best-selling book, which details a history of treating women very badly.  He says they are exaggerations for effect and that he isn't that person any more.  What of the many tricky dynamics of the play is that we're supposed (I think) to get a sense he's is indeed changing--but that process is far from complete.  One particular act of frustration and anger that shows an amazing arrogance brings it all crashing down, an act he almost instantly recognizes as wrong, but...too late.  He learns from this.  Just as she does.  And indeed the arc she goes through is supposed to be just as vivid.

This production does a lot of things right, but never gets to the raw core of the text.  A two character play, full-length no less, requires an absolute commitment and achievement of the truth of nearly every moment from both actors.  Honestly, this does not achieve that.  Whenever they kissed, for example, one felt it happened because the script said so, rather than this was what the characters genuinely wanted.  For that matter--and this will sound odd, maybe too subtle--it did not feel like a live play.  It felt--and looked for that matter--like a movie.  One directed and designed by someone competent but not extraordinary, which frankly remains the level this play needs.  Blocking looked posed, the set looked like a set rather than a real place, Ethan seemed slick with very little heart, Olivia cool even cold rather than touched.

But the more I think on it, the more it seemed to me the changes in character between the two always seemed to happen off stage.  Each scene began with both characters in essentially the same emotional place they ended.  Events happened, decisions were made, but in some subtle but essential way they didn't change in front of us.  Yet the next scene began, and they were slightly different people.  Without showing us the change.

Which is not to say the play was performed badly, not at all.  But it didn't rise to the level of the actual script.  Which is not good.

Finally, I must express a certain degree of horror that this theatre allowed people inside their walls without wearing masks.  Since live theatre has returned to Los Angeles, and after more than a dozen shows, this is the first time I've seen this.  When I mentioned this to the company, the director came out and told folks they "should" wear masks, most donned them.  Some did not.  At least two thirds took their masks off during intermission.  I frankly was very tempted to walk out.  I'm not sure staying was the right thing.  It certainly put my life and health in real danger.

And I'm not feeling forgiving about that.

Posted by Zahir Blue at 8:17 AM No comments: